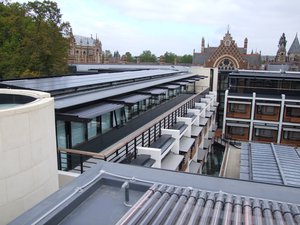 The College is committed to the reduction of carbon emissions, and takes every opportunity during refurbishment work and routine maintenance to reduce its environmental impact.

Buildings such as Kendrew Quad and the new Library and Study Centre include green technologies such as biomass boilers, ground-source heat pumps, and photovoltaics. 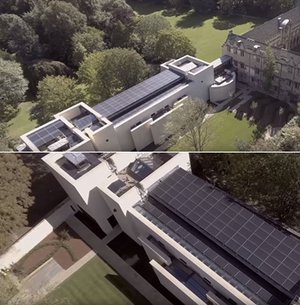 The Library Study Centre completed in 2019 incorporates a number of passive environmental control measures designed to reduce its energy consumption with an emphasis on natural ventilation and daylighting. Heating is provided by ground-source heat pumps, and photovoltaic panels on the roof contribute to electricity generation. In addition the building is triple glazed and high efficiency LED lighting has been installed.  The building services are managed by a Building Management System (BMS), a computer-based system to control, monitor and automate the building’s mechanical and electrical equipment.  Such measures are designed to fully offset the building’s carbon emissions to achieve a carbon neutral status.

The College complies with two of the government’s energy related schemes which aim to reduce carbon:

The College was part of the Government scheme called the Carbon Reduction Commitment (CRC) Energy Efficiency Scheme, up until 2019 where it was replaced with a simplified system of reporting.  CRC was a mandatory scheme aimed at improving energy efficiency and associated carbon emissions in large public and private sector organisations. The scheme’s purpose was to encourage organisations to reduce carbon emissions by reporting to the Government on all carbon emissions produced.  The College was then charged for each tonne of emissions produced and placed in a reputational performance league table.

In 2019 CRC was replaced with a new scheme, the Streamlined Energy Carbon Reporting Scheme (SECR) which will continue to monitor and report on the College’s carbon production. The SECR will complement the Energy Savings Opportunity Scheme and assist the College in its reduction of carbon emissions.

The College is part of the Energy Savings Opportunity Scheme (ESOS), a mandatory energy assessment and energy saving identification scheme.  As part of Phase 1 of the scheme and through an independent audit, St John’s identified energy efficiency recommendations which has led to acceptance of joining the Renewable Heat Incentive (RHI), where financial Government support is provided, enabling us to continue to support green and renewable technologies, provide ongoing maintenance and servicing of existing equipment, and fund future renewable heat projects.

The College has recently completed Phase 2 of the scheme, been audited and looks forward to considering the recommendations of the report.

The College’s listed and historic buildings with their heritage constraints creates a challenge for rolling out energy efficiency initiatives, but with careful planning and working closely with Oxford City Council’s Planning and Conservation Officers, significant improvements have been made over the last few years, with projects such as the replacement of windows within the Beehive building and at Hart Synnot House, with further projects planned for the future.

In the 2016-17 University Sustainability Showcase awards, the College won a Silver award.  David Line, Domestic Stores Manager,  won a Green Impact Staff Award  and the students were highly commended in the Student Switch Off competition.