Share
Most library facilities are housed in the 16th and 17th-century buildings of Canterbury Quad, including the main study rooms and the Old Library which contains collections of historic books. College continues to develop these facilities and there is a modern Law Library on Kendrew Quad. A new Study Centre adjoining the historic library spaces will open in October. 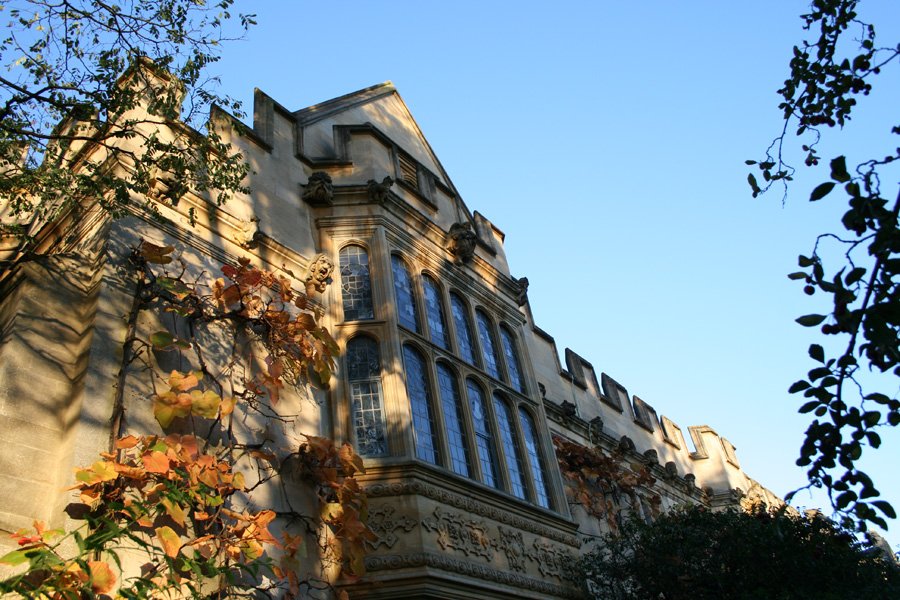 The Oriel Window of the Old Library from the College Gardens.

History of the Library

The Library began in 1555 with about 150 volumes. These were mostly theological, philosophical and legal books, together with texts by classical authors, given by Sir Thomas White and his friends. Many important donations followed, and over the centuries the Library has grown into an important collection including many thousands of books. Library Plan

The Old Library
Built in 1596–98, the Old Library was the first in Oxford to be designed with shelved bookcases, with seats and desks between them, instead of the low lecterns which had sufficed in medieval libraries. The existing pew-like seats and the lower parts of the cases date from 1596-98, but the latter were raised in the 17th century to accommodate more books. The roof was originally ceilinged, concealing the irregular roof-timbers; these were exposed in 1888, when the ornate metal tie-rods were inserted to prevent the roof spreading. The Library was extended at the eastern end during the 1630s to link it with the new Inner Library, now the Laudian Library.

You can see a virtual tour of The Old Library here.

The Laudian Library
The Laudian Library, forming the eastern range of Canterbury Quad, was built in 1631–35 by William Laud (1573–1645), Archbishop of Canterbury and formerly President of the College. It was originally known as the Inner, or Mathematical Library, and housed mathematical instruments, manuscripts and other treasures, in cases which belonged to Archbishop Laud; one of these remains at the northern end, decorated with Laudian heraldry in the openwork panels. The present Gothic bookcases, together with the angels and other decorations in the roof, were installed in 1838 to designs by a local architect, H.J. Underwood. Formerly the roof timbers were hidden above a barrel-ceiling. Two modern cases, incorporating metal panels from destroyed Laudian ones, contain books and papers relating to the poet and classical scholar A.E. Housman.

The Paddy Room
When plans to include a science library in the Thomas White building were abandoned in 1969–70, it was decided to take over the five undergraduate sets beneath the Old Library, and this was done in stages between 1971 and 1977. The date 1965 over the Library entrance is misleading, as it refers to earlier alterations to the undergraduate rooms existing previously. The Paddy Room is named after Sir William Paddy (1554–1634), a graduate of the College, Physician to King James I and a great benefactor of the College. In the first half of the 17th century he gave the Library many hundreds of his books and manuscripts, and endowed the Chapel (Paddy Organ Scholarships, etc.). His portrait hangs over the west door of the Old Library, and many of the printed books given by him, on medical subjects, can be seen there.

The Law Library (Holdsworth Room)
The modern Holdsworth Law Library opened as part of Kendrew Quad in 2010. It is named after Sir William Searle Holdsworth (1871–1944), Fellow of St John's 1897–1922 and Vinerian Professor of Law, and later Honorary Fellow. His portrait by E. Plachter can be seen there. 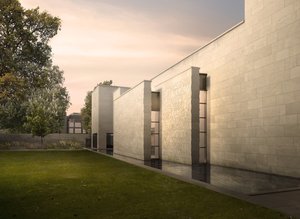