Share
The Library hosts several collections of personal papers relating to some of its more prominent literary alumni. The most extensive of these is the Robert Graves archive, but there are also collections relating to the classical scholar and poet A.E. Housman, the poet Philip Larkin, and the classicist and translator J.B. Leishman. There is also a notable collection of papers from the comic and author Spike Milligan. 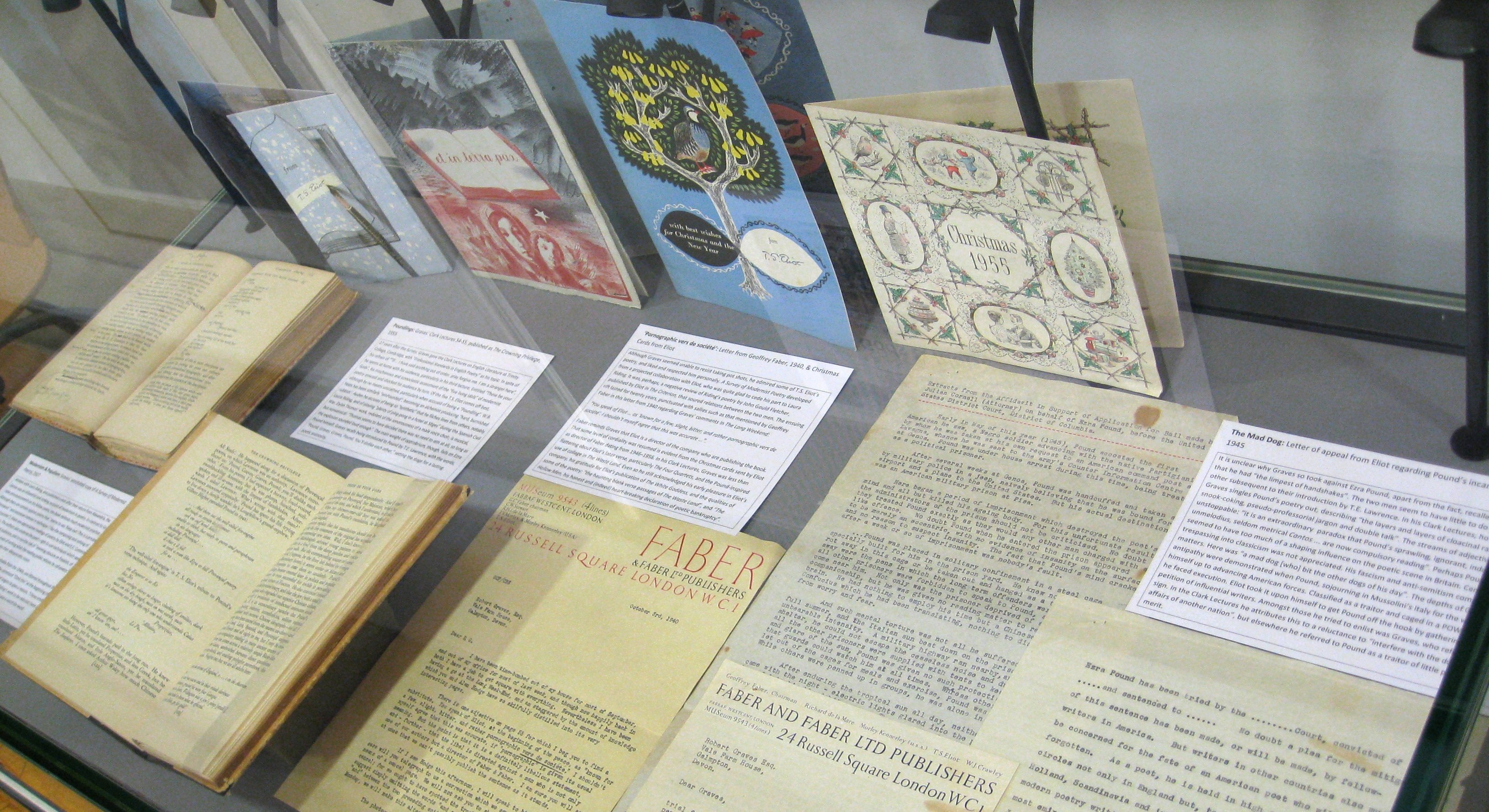 A display of material from the Robert Graves Archive, incorporating Christmas cards and letters to Graves from T.S. Eliot

The papers and working library of the poet and author, Robert Graves (1895-1985), most famous for his First World War memoir, Goodbye to all that,  and his historical novel set in Julio-Claudian Rome, I Claudius, were bequeathed to the St John’s College Robert Graves Trust by his widow, Beryl, in 2003. Together, the library and archive, consist of most of the material that was left in his house in Deyá, Majorca, on his death. The archival component contains tens of thousands of items – letters, manuscripts and ephemera – mostly accumulated since 1946 when Graves returned to the island. Although Graves sold many of his papers, particularly his manuscripts, during his lifetime, what remained in Deyá with him and Beryl forms an immensely rich collection reflecting the diversity of his interests and correspondents. These latter include John Aldridge, Norman Cameron, Tom Matthews, Alastair Reid, Lynette Roberts and Alan Sillitoe among many others.

Finding material: Papers & Archives are on the Archives Hub. The Graves Library is on SOLO where its original order of shelving has been preserved. For a quick overview, there is a shortlist of the working library provided on the website of the Robert Graves Society.

A small but significant collection of papers from the writer, poet and comedian Spike Milligan (1918–2002) has been given to the College, including illustrations and typescripts of many of his books, such as the war memoirs and some of his books for children. Milligan was a close friend of Robert Graves and the collection includes their correspondence.

Finding material: A full description of this collection is now available via the Archives Hub.

Associated with John Sparrow's collection of books relating to the poet and classicist A.E. Housman is a small selection of Housman’s correspondence, some photographs and Sparrow’s own correspondence and papers pertaining to his collecting and his work with John Carter to compile Housman’s bibliography.

Finding material: This is currently possible only using typescript catalogues available in the Library.

Most of the papers of the poet Philip Larkin were deposited at the University Library in Hull but St John's does have a small collection of letters and postcards from Larkin to his publisher and friend Charles Monteith.

Finding material: A full description of this material is now available on the Archives Hub.

Other collections of letters & papers

For historical reasons several other collections of letters and papers, of varying extent and scope,  have been located in the general manuscript sequence. Among these are 5 letters from the author Jane Austen to her niece Anna, 130 letters from the clergyman John Rose (1754-1821) giving lively description of contemporary society, and collections of correspondence relating to the political thinkers Josiah Tucker and Thomas Hare.