Share
St John's holds significant collections of early or rare printed books. There are nearly 20,000 books printed prior to 1850, the earliest dating to 1465. These are a rich resource covering almost all subject areas, but with particular strengths in medicine. Additionally there are more recent collections relating to literary alumni and a collection of fine printing and livres d'artiste.

The Library's collection of early printed books, amassed from early benefactions to the College in the 16th, 17th and 18th centuries, includes 143 incunabula (books printed prior to 1500), the oldest being a copy of the editio princeps of Cicero's De Officiis printed by Johannes Fust and Peter Schoefer in Mainz in 1465. 11 editions printed by William Caxton appear, including a copy of the illustrated second edition of Canterbury Tales with hand-colouring and illumination.

Other highlights come from a broad range of subject areas, and include hand-coloured astronomical charts with moving pieces in Peter Apian's sumptuous Astronomicum Caesareum of 1540, some of which are still attached by threads with the original seed pearls, hand-coloured atlases by Ortelius and Mercator, a Shakespeare 2nd folio, Eliot's Algonquin Bible, Johnson's Dictionary, an album of Hogarth prints, 1st editions of Dickens, and many other items. Several early donors were medical practitioners and consequently there are strong collections in this area, including a second edition of Vesalius, Cowper's Anatomy (as well as Bidloo's from which it derives), Tyson's Orang-outang, sive Homo sylvestris: or, The anatomy of a pygmie, as well as first editions of works by Richard Lower and Thomas Willis.

Detail of an engraving of a skull from William Cowper's 'Anatomy of Humane Bodies', 1698.

A valuable collection of more than 1000 books on the history of mathematics, astronomy and science, which was bequeathed by the politician Ivor Bulmer-Thomas, MP (1905–93). Ten percent of the collection consists of early editions and copies with significant provenances and fine bindings, among which are several early editions of Euclid (including Erhard Ratdolt's first edition of 1482) and numerous early astronomies.

Finding books: Details of the collection can be found on SOLO.

Detail from Erhard Ratdolt's first edition of Euclid, 1482, showing one of the first printed mathematical diagrams.

The College's collection of 20th-century livres d'artiste and private press editions was built up by Dr Peter Hacker, Fellow Librarian 1985-2006. It is particularly strong on the work of Atelier 17 and soft-ground etching in general. Works designed and printed by Eric Gill (notably his Four Gospels, Song of Songs and Utopia) and other fine press productions also appear.

Finding books: Detailed catalogue records for this fine collection can be found on SOLO by searching for 'spec coll lda' in the 'shelfmark'. 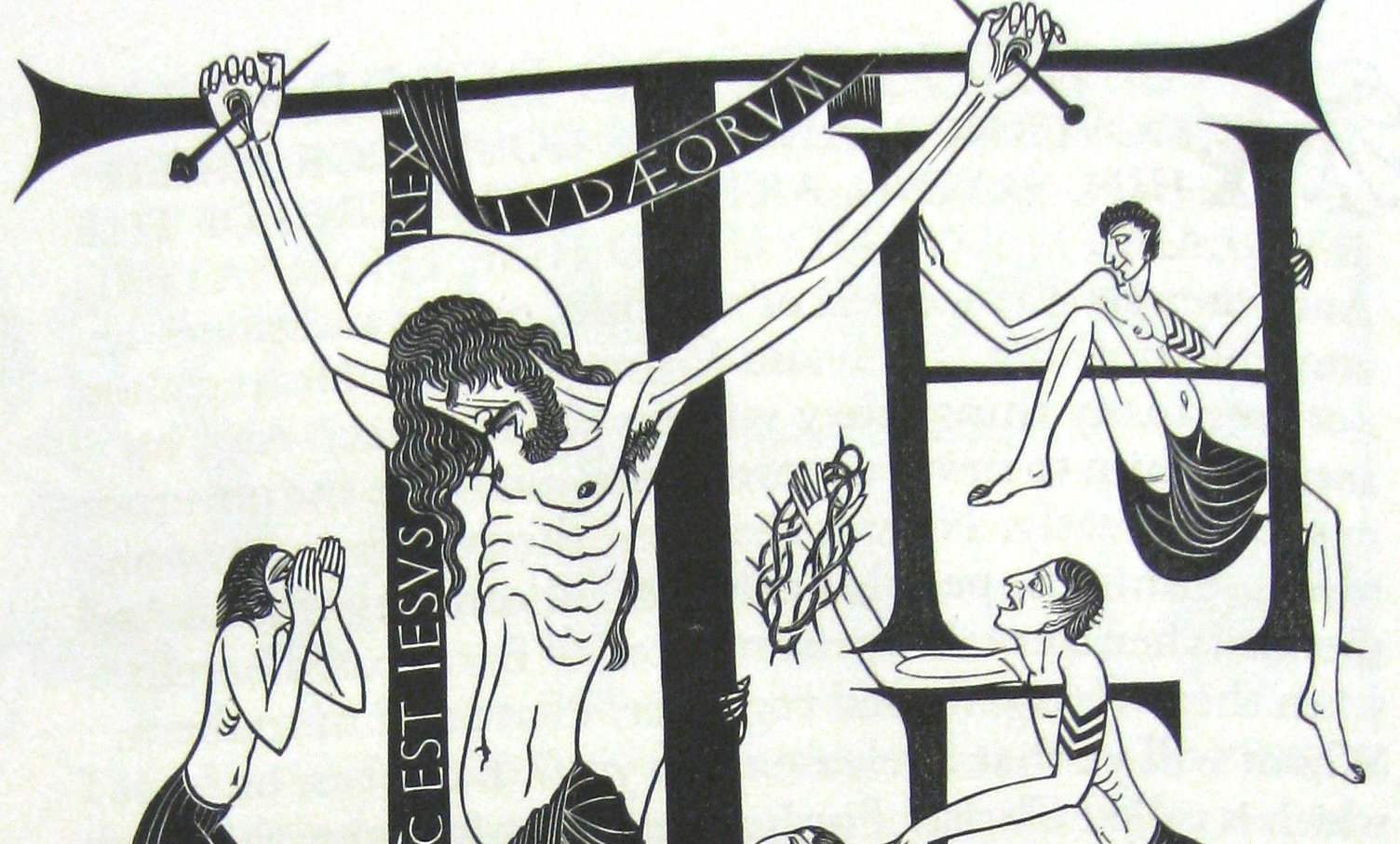 Detail of a Crucifixion scene from 'The Four Gospels' designed and printed by Eric Gill, 1931.

Graves’s working library comprises about 1500 editions reflecting his interest in English, Greek and Latin literature, comparative religion, mythology and anthropology, as well as first editions of his own works, school prizes and books received from friends. The collection also contains publications of the Seizin Press, an imprint founded and operated by Graves and the American poet Laura Riding during the years they spent together in London and Majorca before the Second World War.

Graves was not a collector, however. He kept books primarily for their content, rarely for their association with a former owner or donor. He would compile indispensable ‘working collections’ when writing about a particular subject, discarding them upon completion of the project. A group of books about Tonga and Wesleyan missionaries, for example, may represent the research for an unfinished project. As a result, many of the books in the working library are heavily annotated.

Finding books: Detailed catalogue records for this fine collection can be found on SOLO.

Detail of the title page of 'The Welchman's Hose' by Robert Graves showing a wood engraving incoporating a magpie and a rose by Paul Nash.

St John’s has two small but significant collections of books relating to the classical scholar and poet A.E. Housman.

Housman's library of classical works
The collection consists of about 300 books and pamphlets, whose particular value lies in the evidence they bear of Housman’s textual criticism, in the form of notes written in the margins and on loose leaves. It was acquired in 1936 from Basil Blackwell.

Housman collection donated by John H.A. Sparrow (1906-92)
John Sparrow donated his collection of books and pamphlets by and about Housman to the College in 1984. The collection consists of works:

Finding books: The printed books from the Housman Collection have been catalogued on SOLO using the Advanced Search, limiting the search to 'St John's College Library' from the dropdown menu, and including the Copy Specific Notes term 'Housman'.

Detail of a page of commentary on Sophocles from an edition by R.C. Jebb with caustic annotations in pencil by Housman.

Hassett collection of Yeatsiana in honour of Professsor John Kelly

In 2014 the Library received a generous donation of 17 items relating to the poet W.B. Yeats from Dr Joseph Hassett, in celebration of the work of Professor John Kelly on editing Yeats's letters. This included two autograph letters from Yeats together with several first editions of works by Yeats, books published by the Cuala Press established up by Yeats's sister, and items owned and signed by members of Yeats's circle.

Finding books: Details of all the printed items from the collection are now available via SOLO by limiting the search to 'St John's College Library' from the dropdown menu, and including the Copy Specific Notes term 'Hassett'. 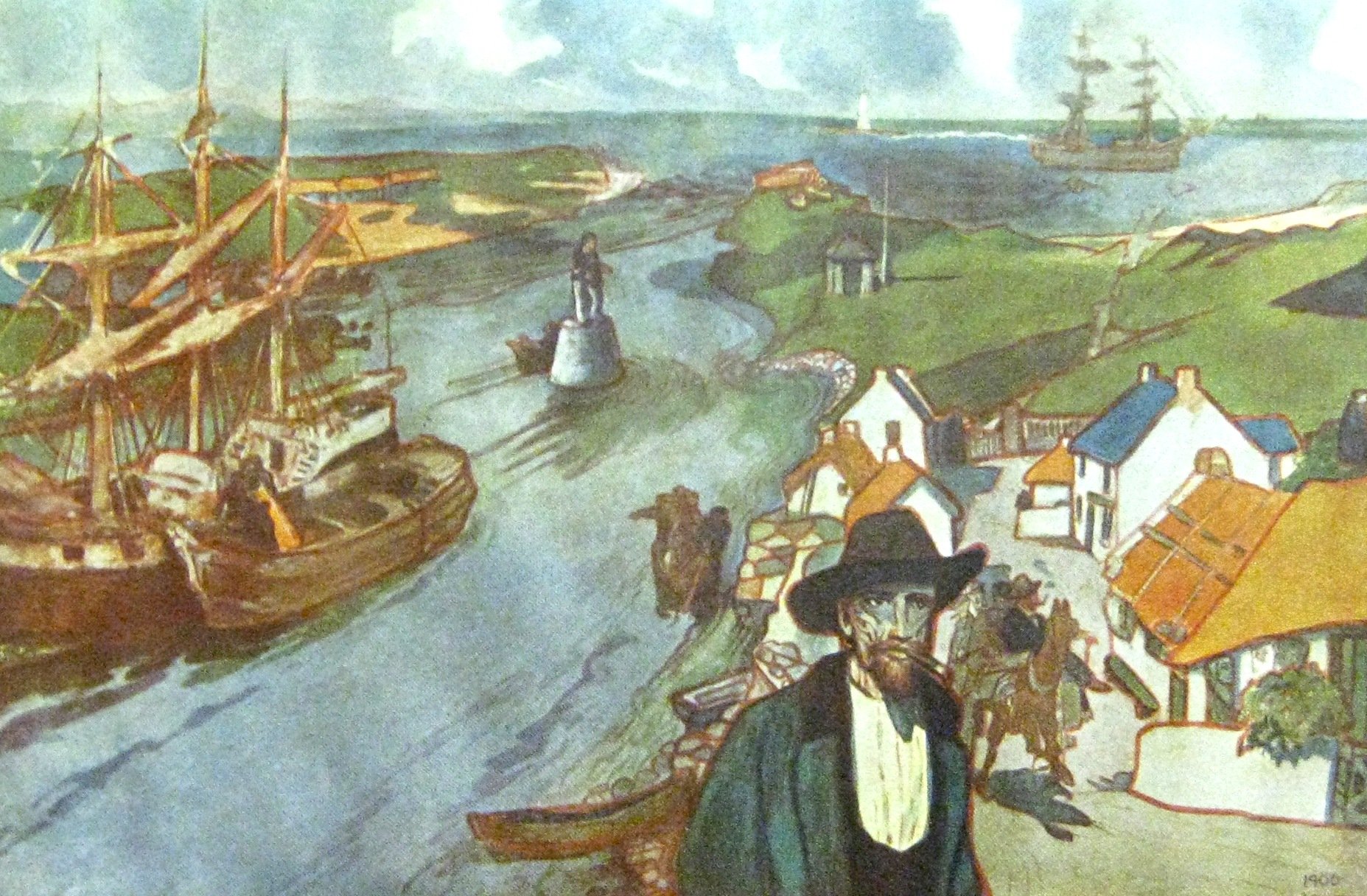 'Memory Harbour' an illustration by Jack B. Yeats to accompany his brother's 'Reveries over childhood'.

In the 1950s St John's moved its tiny collection of early Chinese books to the Bodleian Library's Chinese collections on long-term deposit. These consist of 5 items from the 16th, 17th and 18th centuries. Mainly they are bound fragments of cheap editions which were sold on to Western collectors who couldn't read what they were buying and merely wanted examples of exotica. There is one complete item: an 18th-century edition of the Kangxi Dictionary still in several brocade boxes, and which seems to have been the focus of a visit to St John's by one of the first Chinese visitors to England, Wang-y-Tong.

Finding books: Details of these books can be found on the University's Serica database by searching on shelfmarks beginning ‘St John’s Coll. Chin’. Applications to consult any items must be made to the Bodleian's Curator of Chinese Collections.

Detail of the 18th-century Kangxi Dictionary.

Since its foundation, the College Library has been enriched by gifts and bequests of  books. Names of previous owners have been included in the catalogue records, as have binding types and other significant features. This information is accessible via SOLO by limiting the search to 'St John's College Library' from the dropdown menu and searching for desired terms 'In copy-specific notes' (from the third drop-down menu under 'Limit your search:'), but any set of results retrieved is really a starting point and needs careful analysis as the search is not sensitive and will generate numerous false positives. Once you have a result and are looking at an individual record click on the 'Description & Links' tab to survey the specific information for each copy, which will be under the appropriate institutional shelfmark listed at the bottom of the display. Please contact the Librarian for help or advice on such searches if required.