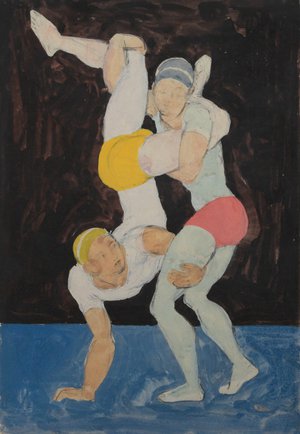 Duncan Grant's (1885–1978) forays into the decorative arts, landscape painting, and, most importantly, the way in which he portrayed the human form, have made him one of the most influential British artists of the 20th century. This exhibition, featuring works on loan from St Peter's College, will re-examine Grant’s artistic investigations into the nude, and how he conjured such vivid depictions of the body. Rather than draw attention to the sensationalised sexual relations between Grant and his partners in the Bloomsbury Group, the exhibition focuses on the non-binary perspective he heralded in his painterly perspective, moving away from the classical, academic approach to a quieter, more intimate naturalism. Duncan Grant broke free of the stable rules of ancient Greek art – rejecting dramatic, hypermasculine figures in favour of a more fluid perspective. The works in the show deconstruct gender roles and draw attention to the quiet beauty of the human form.

This exhibition has been made possible thanks to the generous support of the Master, Fellows and Scholars of St Peter’s College, Oxford.