Bernard Taylor is a British scientist (organic chemist) who has worked in manufacturing industry and then corporate finance at a senior level for many years. He became an Honorary Fellow of St John’s in 2008 and is Deputy Steward of the University of Oxford. He has been a Deputy Lieutenant of Oxfordshire since 2011 and was appointed CBE in the Queen's Birthday Honours in 2017 for services to business, education and the arts.

Bernard read Chemistry at St John’s as a Scholar and went on to become a Member of Council at the University of Oxford (serving two terms between 2003–11). He is currently Chairman of Thomas White Oxford Limited, the development company responsible for delivering Oxford North, the new global life sciences district for Oxford. He was the first chair of the College's Remuneration Committee and is currently chair of the Development Board. He continues to serve on many University committees as well as being on the Board of the Medical Sciences Division and the Mathematical, Physical and Life Sciences Division. 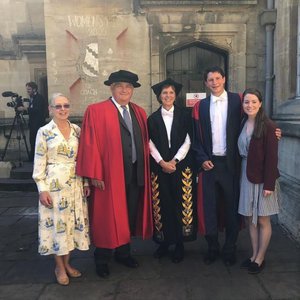 Bernard is also Chairman of the Taylor Charitable Settlement, the Royal Commission for the Exhibition of 1851, Garsington Opera and the Advisory Board of the Royal Society. In addition he is director of OSE plc (Oxford Sciences Enterprises), which he helped found in 2014.

The College warmly congratulates Bernard on the award of this honorary degree and this recognition of his tireless service to St John’s, the collegiate University and the wider community.