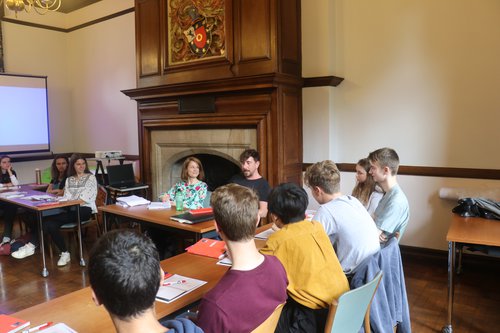 Alongside Ruth MacDonald from the Access and Admissions Office, Professors Murnane and Duttlinger welcomed 20 students in Year 12 from schools across England and Wales to a Kafka-themed German Study Day. This included an academic session on dramatic adaptations of Kafka’s novel, an introduction to Modern Languages at Oxford by tutors and students, and tours of St John’s and Wadham.

Professor Murnane said: ‘The students seemed to really enjoy the format. We explained to them that they were part of a day of events and that we would be presenting their work to an audience of experts later in the day. It was great to be able to involve them so closely in our current research.’

We also hosted over 30 Oxford undergraduates and graduates in German for morning and afternoon workshops on the editing and adaptation of literary works, using Roland Reuß’s new edition and Ed Harris’s radio play as examples.

The day concluded with a well-attended public podium discussion in the Garden Quad Auditorium, with Professors Duttlinger, Murnane and Robertson alongside Roland Reuß of the FKA Historical-Critical Kafka Edition, and Ed Harris. ‘With Oxford German Studies looking to build up to the centenary of Kafka’s death in 2024, this was an ideal opportunity to discuss Kafka’s legacy and importance today. It is astonishing how relevant Kafka’s discussions of bureaucracy and social life in The Castle still are, and it was exciting for the audience to hear about Ed Harris’s experiences in introducing Kafka to new audiences with his audio play’, said Professor Murnane.