The contest requires participants to use maths and computer science skills to analyse real-life problems and present a 25-page paper in four days. Specifically, the team utilised Cellular Automaton, Hidden Markov Chain, and Computer Vision models to provide data-centric insights into preventive measures against invasive species in North America. Their solution was awarded Outstanding Winner (top 15 among 10,000) and two additional prizes including AMS Award (the best paper for task C) and INFORMS Award (the best paper for tasks A, B, and C) for creative resolution. 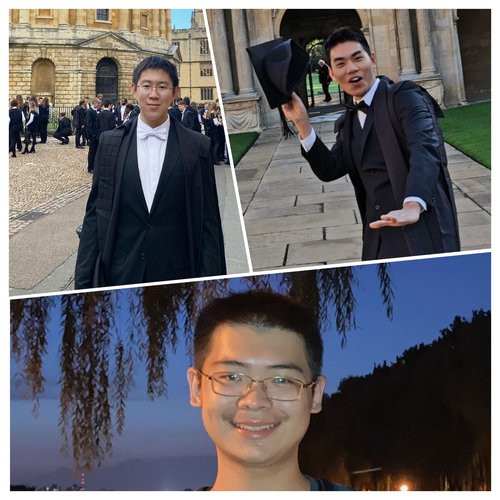 The team (clockwise from top left: Xingjian, Yizhang and Ruize) expressed their gratitude to St John’s for funding their registration and for providing workspaces during the competition. The experience has given them great encouragement and motivation as they continue their academic journey at Oxford.

‘We are delighted by the fantastic success of our students in this tough international competition. It is proof of their skills and intelligence – but they also worked hard for it. The initiative to take part in the MCM contest came from the students: they formed the team and prepared for the competition on their own. We are extremely pleased by the result and compliment the students on their great enthusiasm – and for achieving this success alongside their already considerable workload.’

The problem tackled by the students required investigation of the discovery and sightings of Vespa mandarina (also known as the Asian giant hornet) in the State of Washington. After providing some background information and a significant amount of data, teams addressed several questions. How can we interpret the data provided by the public reports? What strategies can we use to prioritise these public reports for additional investigation given limited resources? As most reported sightings of the Vespa madarina are erroneous, teams developed a model to predict the likelihood of a mistaken classification. Teams then used their model to prioritise the investigation of reports most likely to be positive sightings. Additionally, teams addressed possible updates to their model over time and indicators of eradication.

You can read the Oxford team's answer here.

The Consortium for Mathematics and its Applications (COMAP) aims to power solutions for the twenty-first century through mathematical applications and modeling resources.