Share
Ellen Taylor, studying for a DPhil in Experimental Psychology at St John’s, and her mother, Sarah, have become the first women to ever swim across the Saltstraumen maelstrom in northern Norway, and the first people to do so without wetsuits. 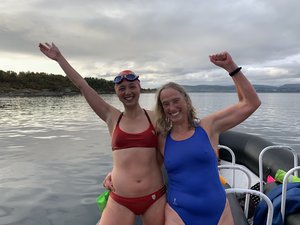 Following this impressive feat, Ellen wrote to describe the experience:

“The Saltstraumen is the strongest tidal current in the world, and the world's strongest maelstrom. It's located in the Arctic Circle in Norway, between two islands where the over 400 million cubic metres of water rush between the sea and the fjord every 6 hours. At its strongest the currents can reach speeds of 20 knots, and the momentum causes multiple whirlpools of up to 10 metres in diameter. As the tides turn, there is a short space of time when the water is safe enough to swim across. We had about 12 minutes to make our crossing.

“The distance was just 250m, but the currents make swimming quite difficult. It took us 8 minutes 46 seconds. There were lots of jellyfish in the water, including lion's manes which can give a nasty sting, but luckily we managed to swim through them safely. We were expecting to be swept out to sea, but we managed to swim in almost a straight line. We were escorted by Knut Westvig from Stella Polaris Arctic Adventures - a company that takes rib boats of thrill-seeking tourists out into the maelstrom when it's at its worst. He knows the tides better than anyone, and timed our swim perfectly so that we were swimming in the calmest water. We couldn't have done it without him.

“I swam the Saltstraumen with my mum, Sarah Taylor. She's a mad swimmer - she swam the English Channel in 2010, and since then we've been swimming together all the time. In 2014, we completed a relay of the Channel together. Since 2016, we've been competing internationally with the GB Ice Swimming Team at winter swimming championships (including UK, Germany, Estonia and Sweden).

“I had the idea of swimming across the Saltstraumen after swimming the Corryvreckan (third strongest) whirlpool in Scotland last summer. I wondered what the first strongest was and found out about the Saltstraumen. Only 3 people had swum it before: the 'Wild Swimming Brothers', Jack, Calum and Robbie Hudson from the UK. I emailed Jack and asked for some more information about how they planned the swim. He has been hugely helpful and supportive.

“The whole thing feels surreal. I'd wanted to do this for so long that now it's over I'm struggling to know what to do with myself. We had 10 days in northern Norway beforehand to get used to the water temperatures. The scenery there is just incredible. The maelstrom itself is surrounded by mountains and woodland, and the water is crystal clear. Being able to swim in such a beautiful place felt like a dream come true - the fact that we were the first women to do so is just an added bonus!”

Many congratulations to Ellen and Sarah on this amazing achievement!