Share
Research group led by Professor K. J. Patel, Supernumerary Fellow at St John’s, has published a paper with important implications for those undergoing chemotherapy and children with Cockayne syndrome.

It's a scenario familiar to many of us: an unpleasant experience with food poisoning leads to a long-term aversion to the offending food. This aversion, however, is not always the fault of badly prepared food: chemical food poisoning can also be caused by toxins in the food source, and patients undergoing cancer chemotherapy also report feeling nauseous and losing their appetite. But how do our bodies know to translate chemical food or drug poisoning into a food aversion?

In a paper published in Nature, Professor KJ Patel’s research group at the Weatherall Institute, in collaboration with colleagues at the Laboratory of Molecular Biology in Cambridge and Hubrecht Institute in Utrecht, has identified a mechanism which explains how we recognise and respond to toxic food and chemotherapy. They arrived at their conclusions serendipitously, through investigating a rare genetic illness known as Cockayne syndrome which causes children to age prematurely, develop kidney and brain degeneration, and suffer severe weight loss. We know that these individuals are unable to repair DNA damage which interferes with gene expression, but it was unclear why a failure to fix DNA damage should cause the severe symptoms of Cockayne syndrome.

Working with genetically engineered mice which lack the Cockayne syndrome B gene-CSB, mutations in which cause the syndrome, the research team first noticed that the mice showed none of the same symptoms as the human illness. The animals were then further engineered so that they would accumulate formaldehyde. Formaldehyde is a very toxic molecule often used in embalming, but previous work from the Patel lab has shown that humans produce a lot of formaldehyde naturally, some of which probably comes from dietary sources. Remarkably, the team found that the mice that could neither clear formaldehyde nor repair damaged DNA went on to develop all the features of Cockayne syndrome in humans.

The team then discovered that DNA damage in a particular cell type in the kidney, the proximal tubule cell, causes it to secrete a factor called GDF-15 into the blood stream, which signals to the brain to suppress appetite. Finally, the team showed that the same hormone is secreted when the mice were treated with the chemotherapeutic agent Cis-Platin, explaining why chemotherapy also results in appetite suppression.

These studies suggest when we consume toxic food or are exposed to chemotherapy, toxins enter the blood, which is constantly filtered by the kidney to make urine. The toxin in the urine then damages the DNA in the kidney cells, causing GDF-15 to be secreted into the blood, which then binds to its receptor that resides in the feeding centre in the brain. 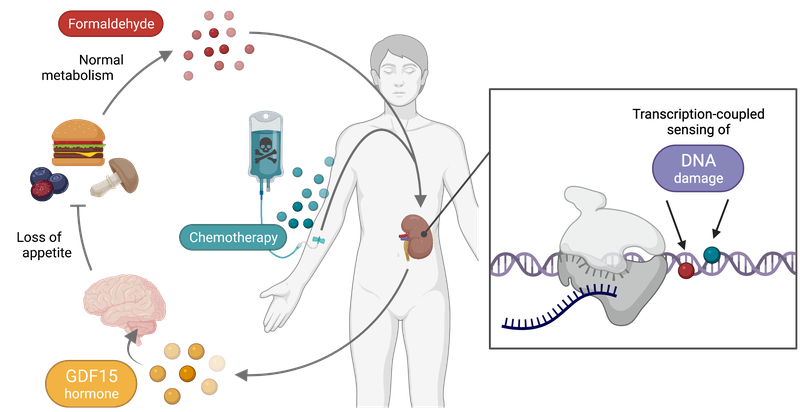 In Cockayne syndrome the failure to repair the toxin-derived damaged DNA results in the body being unable to stop the release of GDF-15, thereby explaining the relentless weight loss in this illness.  The discovery of the unexpected connection between DNA damage and food intake opens up exciting opportunities to therapeutically interfere with this response, in order to improve the nutritional state of the many people undergoing cancer chemotherapy and children with Cockayne syndrome.

As for why our bodies have developed this response, the authors speculate that this food aversion response might have evolved in mammals to provide protection against the ingesting toxic food sources.

You can read the paper on the Nature site here.