Share
As part of our Pre-GCSE Inspire Programme, currently running in 24 non-selective state schools in Ealing and Harrow, our Access & Outreach team have recently coordinated two full-day Aspiration Days per borough running on weekends, allowing pupils enrolled on the programme to get creative and explore new subjects in depth.

In January, pupils from both boroughs explored the London Science Museum and Imperial College London at our Space and Engineering Aspiration Day, and in February pupils participated in a Writing & Social Justice Aspiration Day with the Orwell Youth Prize.

The day began in the Science Museum’s Wonderlab, a fantastic gallery with over 50 hands-on exhibits covering forces, electricity, light, sound, matter, space, maths and more. Pupils had two hours to explore these exhibits, completing challenges such as building a self-supporting bridge, designing the ‘best’ paper flyer and changing the angle and force of a water jet to hit targets. Additionally, students were able to attend The Rocket Show: a hands-on illustration of the chemistry involved in rocket launches.

After a short lunch break the groups rotated through a series of afternoon activities. In the Exploring Space gallery, pupils learned about spacecraft, voyages to the Moon and how life works out in space—what do you eat? How do you go to the bathroom? A particular highlight of the afternoon was the virtual reality space descent with Tim Peake, which follows the 400 km journey Tim Peake took in a Soyuz capsule from the International Space Station back to Earth. Using state-of-the-art VR technology, pupils got a 360° look inside the capsule and experienced the descent with narration from Tim Peake himself.

The conclusion of the day was a series of talks at Imperial College London just across the road, where current PhD students and researchers gave short presentations about their research and what motivated them to study at university. Sara Motaghian introduced students to the ExoMars Mission and her work on imaging software, which will enable us to see the surface of Mars. James Finley gave an interactive demonstration of composite materials and how these are used in the Aeronautics industry, whilst Josh Rasera took our pupils forward to the year 2030 and showed them what a day would be like as a moon-miner! 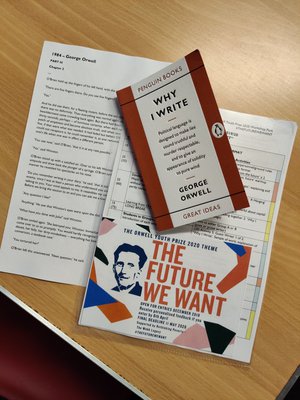 The pupils attending the Writing and Social Justice workshops with the Orwell Youth Prize—a charity which connects writers and journalists with young people, to encourage them to engage through writing with the world around them—experienced a full day of various interactive activities, all framed around the Youth Prize’s theme of ‘The Future We Want’. Attendees were encouraged to think creatively about the issues in the world that mattered most to them, and to express them through writing in a number of genres, drawing for inspiration on the writings of George Orwell, including Animal Farm and 1984.

A highlight of the workshops was the opportunity for the participants to take part in small-group breakout sessions with professional writers, who shared their work with the young people, answered questions and gave pupils tips and advice on how to improve their own writing. In both boroughs, one of the sessions was led by the performance poet Pete the Temp; in addition, pupils in Ealing were joined by BBC journalist Alison Holt, and those in Harrow by poet and screenwriter Ankita Saxena.

Finally, pupils had the chance to work on and share their own writing, with direct input from the experts in the workshop. We hope that all of the participants ended the day with the confidence that their voices matter, and that they were inspired to use the power of their writing and self-expression to help create the future they want!

You can see some headlines written by our participants via the Orwell Youth Prize's Instagram account below!

Do you want to visit St John's with your school? Attend a Study Day? Apply for funding to visit us? Find some interesting reading or challenging practice questions in your subject? Find out what else we offer?