Share
A multidisciplinary team at St John's is using exciting new methods to explore how our brains have evolved over millennia, and how they develop before we are born.

The human brain is the most complicated organ of any animal, formed and sculpted over five hundred million years of evolution.

The cerebral cortex is the folded grey matter that forms the outside of the brain, and is perhaps the crowning achievement of evolution. It provides the biological substrate for human cognitive capacity and is, arguably, the region of the brain that distinguishes us from other species. This is the seat of our functions of language, episodic memory and voluntary movement. 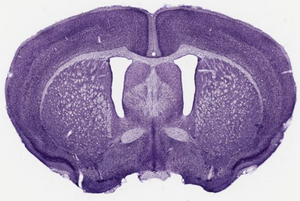 Given that the massive expansion of cortical surface observed in primates originates during development in the womb, understanding the cellular and molecular mechanisms regulating cell number and diversity, migration and circuit assembly is critical for shedding light on this process. This research project is a multidisciplinary attempt to understand the evolutionary mechanisms that have culminated in the human cortex. It brings together the skills of mathematicians, statisticians and biologists. St John’s Professor Zoltan Molnár’s experimental lab at the Department of Physiology, Anatomy and Genetics contributes the biological element of the project, and Professor Philip Maini and Dr Thomas Woolley are overseeing the mathematical biology at the Wolfson Centre for Mathematical Biology. The project is supported by the St John’s Research Centre. 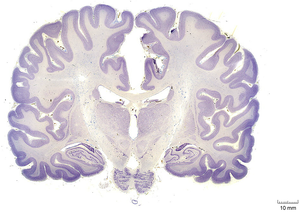 The cerebral cortex of mammals has a unique structure, composed of six uniform layers of different types of neuron, or nerve cell. These layers are interconnected in a stereotyped fashion. The thickness of the cortical layer is roughly the same across different species; what differs dramatically between species is the number of neurons in the cortex, and therefore its surface area. So a human cortex has 21 billion neurons as opposed to a mouse’s 12 million, resulting in 1000 times the surface area and the very significant difference in its function.

Coronal sections of the mouse (top) and human (bottom) brains. The neocortex corresponds to the most external visible layer. It is smooth in the mouse brain, and convoluted in the human brain. Images from www.brains.rad.msu.edu

Neurogenesis is the process by which neurons grow and develop. Many factors influence how neurogenesis in the cortex differs between species, including the types of neuron, the different ways in which they proliferate and differentiate, and the length of the process (85 days in a human, 8 days in a mouse). This project combines mathematical modelling and experimental observations to highlight these different factors. Dr Noemi Picco, postdoctoral Research Associate in Mathematics at St John’s, is developing a mathematical model for the proliferation and differentiation of neurons in the cortex. The hope is that this will allow the team to map all the possible evolutionary pathways of the cortex, and create a mathematical framework that is general enough to encompass all cortex development, while being specifiable enough to allow a researcher to focus on a single species. This in turn has the potential to create a new way to categorise different species, according to their cortex development.

As part of the project, Dr Picco has released a Neurogenesis Simulator, an app that allows experimentalists to ‘play’ with the mathematical model, choosing the species and the model and calibrating the parameters, to observe how the model outcome changes without having to worry about the mathematics behind it. It can be downloaded here.

Perhaps the most critical outcome of this project will be the ability to better understand and predict the underlying problems in medical conditions involving the cortex, which could in turn lead to new preventive measures or treatments for these conditions.

The combination of mathematical modelling with biological experimentation certainly has exciting potential for the future.