Share
The College has commissioned a new artwork from architectural artist Kirsty Brooks. This impressive work in glass has recently been installed in the Otranto Passage. 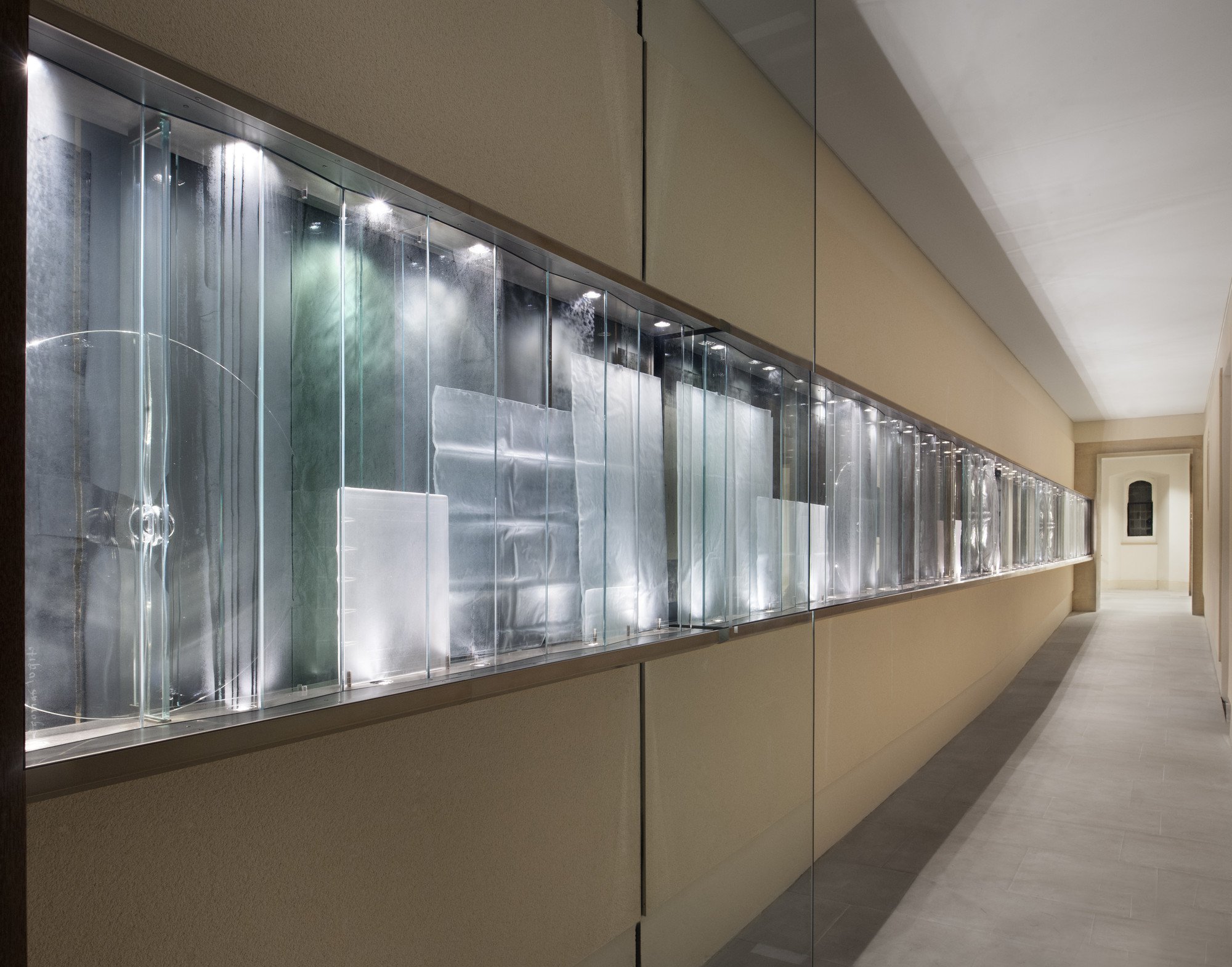 The artwork installed in the Otranto Passage, looking north.

The 15-metre-long artwork details the first 200 years of the College's history, from 1555 to 1755, unfolding the story through texture, light and layers. A mathematically accurate series of abstracted documents, maps and books is placed along a timeline, with each year represented by seven centimetres. Also featured are key figures in the College's early history, such as Sir Thomas White, Sir William Paddy and Archbishop William Laud.

Lit with LED spotlights and housed in a heat-treated stainless steel casing, the sculptural wall panels feature glassmaking techniques from the 16th to the 18th centuries, alongside more contemporary techniques. The work functions as a linear study of patina and proportion, relating directly to the surrounding architecture of the College.

Some features of the work include:

Speaking about her work, Kirsty said, 'Creating an artwork for St John's College has been a real privilege, allowing me a sustained period of time to research and explore a fascinating period of history both for the College and in its wider sense. Working with the staff and having access to the College's archive of books and documents meant that I could immerse myself in a rich aesthetic of the handmade and aged artefact.

'For me, one of the main challenges in creating this piece was achieving the right level of abstraction, delivering an artwork which fitted the brief but maintained a quiet presence which could stand up to repeated viewings. Inspired by the minimal boxed-up documents on the archive shelves, I felt that the only way forward was to take a pared back approach. I was guided by the words of British sculptor Mary Martin, ‘The end is always to achieve simplicity.'

'Working with a large team of glass manufacturers, wood and metal workers, a lighting designer, engineer, the architects and the client group, the piece evolved to become a study of proportion and patina. Driving this process forward and working across various locations and with many people meant that the manufacturing period became very lengthy. The challenge was the specification of each subtle tonality and material quality for the correct combined effect. The piece became five layers thick in some areas and the reflective qualities of the gilding meant that the colour palette was dictated by the cream render within the space.

'With input from the manufacturers, the architects Wright and Wright and with everyone involved at St John's, the piece finally came to fruition this autumn. Creating a piece with hundreds of interlocking parts would not have been possible without the input and judgement of the other artists, designers and makers involved. I saw myself as a conductor, combining and carefully modulating each input. In this way, the artwork combined many layers of expertise, balancing mathematical precision with a translucent collage technique, creating a linear narrative but also an abstract sculpture.'

The Otranto Passage runs along the back of the east side of Canterbury Quad. When the College's major new Study Centre opens in 2018, the passage will form the main entrance to it from the Quad.

About Kirsty Brooks
Kirsty studied architectural glass and painting at Edinburgh College of Art, graduating in 1995. Moving to London, she worked with a range of consultants, galleries and artists’ studios and began to develop her work in a responsive, site-specific way.

Kirsty has created a wide variety of commissioned artworks for public, private and corporate environments. Recent commissions include building façades for the National Film School in Ireland and The Novium Museum in Chichester, a glass clock tower for Kirkstall in Leeds and a series of balustrades for the Grand Opera House in Belfast.

Find out more about Kirsty's work at her website.