Share
The College is very sad to announce the death of Donald Russell FBA, Emeritus Professor of Classical Literature, on 9 February 2020 at the age of 99, after a short illness.

Professor Russell was a leading figure in classical scholarship over many decades and a dedicated tutor, teaching into his mid-nineties. He specialised in Greek imperial literature, Latin imperial prose, and ancient literary criticism, focusing especially on rhetoric, the techniques of effective persuasion. A full list of publications is here. 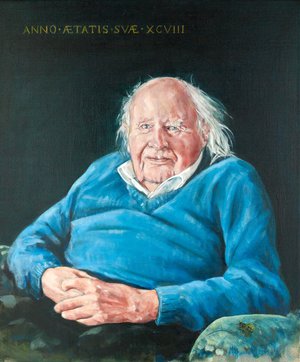 His time as an undergraduate at Balliol College was interrupted by war service, first in the Royal Corps of Signals from 1941 to 1943, then in the Intelligence Corps (at Bletchley Park) from 1943 to 1945. He was Fellow in Classics at St John’s from 1948–88, Reader in Classical Literature (1978–85), and Professor of Classical Literature (1985–88). This year marked the 72nd year of Professor Russell’s Fellowship, making him the longest serving Tutorial Fellow in the history of St John’s.

[As long as humankind survives, as long as appropriate honour is given to literature and due reward to eloquence, as long as the fortune of our College lasts or its memory remains, the admiration for his qualities will flourish.]

Professor Russell’s funeral will take place at 2 p.m. on Monday 9 March in the Chapel of St John’s College. Refreshments will be served afterwards in the Hall. It is requested there should be no flowers but donations to Classics for All would be welcomed. Those wishing to attend the funeral should contact the PA to the President.