Share
Professor Dorothy Bishop, Principal Research Fellow at St John’s, has been chosen as one of the 24 members of the University to be celebrated in a series of new portraits, in the Diversifying Portraiture project.

These new works will add to the rich collection of hundreds of portraits of exceptional individuals that hang on the walls of the University. They celebrate stories from the past, make visible our values and ambitions for the future, and help to shape the present living and working environment for staff, students and visitors. The achievements of these men and women challenged the stereotypes and exclusions of their times, and in some cases continue to do so today.

The new portraits will be part of a celebration of Oxford’s ongoing story of achievement and change. They will widen the range of people represented around the University, and reflect and encourage its increasing inclusivity. The works, by different artists and in a variety of media, will be displayed together in an exhibition later this year and will then join the existing range of portraits around Oxford. The Diversifying Portraiture Project is supported by the Vice-Chancellor’s Diversity Fund, set up at the Equality and Diversity Unit by Trudy Coe and Dr Ruth Scobie.

We interviewed Trudy, Dorothy and the artist Benjamin Sullivan, to find out more about the project and their experiences of creating the portrait: 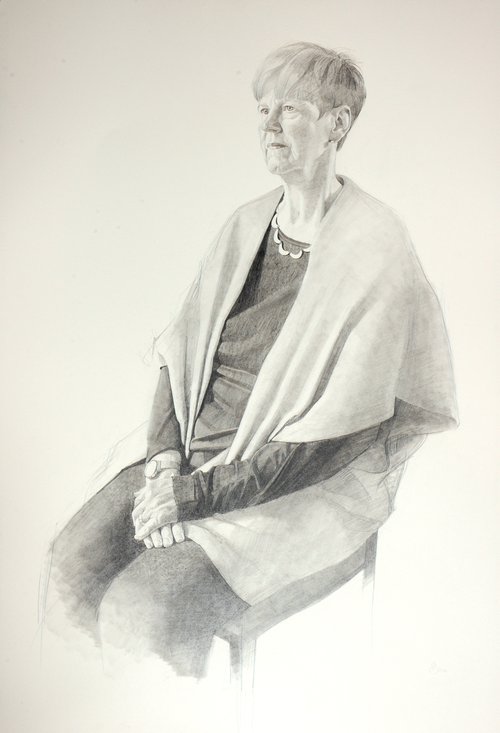 Professor Dorothy Bishop, FBA FMedSci FRS, is Professor of Developmental Neuropsychology in the Department of Experimental Psychology and a Wellcome Trust Principal Research Fellow at St John’s. Her main research interest is the nature and cause of communication problems in children, especially in relation to specific language impairment (SLI), autism, dyslexia and Down syndrome. To study these conditions, she uses methods from linguistics, neurophysiology, genetics and neuropsychology. In describing her work, she says, ‘In some cases, language difficulties have an obvious cause, such as hearing loss or a syndrome such as Down syndrome. In other cases, children have particular difficulty learning to talk or understand language for no obvious reason.

‘My recent work has been particularly focused on these children with 'specific language impairment' or SLI, who are quite common (around 3% of the population) but tend to be neglected by researchers. Using twin studies, I have shown that there is a strong genetic component to these disorders, and I have worked with molecular geneticists to try and find out more about particular genes that are implicated. Currently, we are also conducting a study of children who have an extra X or Y chromosome, who are at particular risk of speech and language difficulties, despite having broadly normal intelligence. These children are very variable in their language skills – although many have difficulties, others have no obvious problems. We hope that by relating their genetic makeup to their language abilities we will be able to throw light on the causes of their language difficulties, and also gain more understanding of how genes affect language learning in children who have the normal complement of chromosomes.

‘My work also extends into the study of related conditions, such as autistic spectrum disorder and developmental dyslexia, which share many overlaps with SLI. I am particularly interested in whether genetic variants that cause a risk for language impairment are also implicated in these other conditions.

‘Ultimately, by unravelling the genetic and neurological causes of language problems, we hope to be able to find ways of helping overcome these problems with early intervention.’

The legacy of Dorothy’s work lies in deepening our understanding of communication through language. Art offers an equally powerful means of communication. Throughout history, portraits have been used to record and celebrate the great and the good. Until a hundred or so years ago, of course, these were predominantly men. Portraits of women were more likely to celebrate their beauty, or their success as wives and mothers. All that is changing, and today there are hundreds of notable women from around the world adorning public and private spaces across the University. They include lawyers, campaigners, philosophers, scientists, novelists, historians, politicians, entrepreneurs, and a bishop. The artists who have depicted them are as diverse as their subjects, but collectively these portraits form a powerful record of the characters and attributes of generations of women.

In the course of the twentieth century, the painted portrait saw something of a decline, in favour of the photographic image. Many superb photographers created memorable portraits of notable figures, and the University has celebrated a wide variety of individuals in this way. Hertford College commissioned a series of 21 portraits of women alumni and fellows from photographer Robert Taylor in 2014. In 2015, St John’s marked the occasion of the matriculation of the 2000th woman at the College with a series of photographic portraits by Chloe Dewe Mathews. These varied and striking images portrayed a variety of women of the College, including Dorothy Bishop.

There remains, however, a strong demand for the artist’s interpretation of the sitter through the medium of paint and other media. Dorothy Bishop’s portrait is a delicate study in pencil (see above). 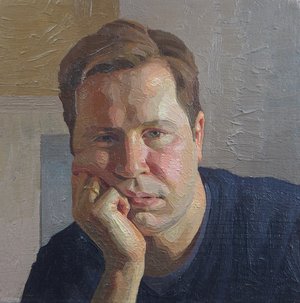 The artist commissioned to draw Dorothy’s portrait is Benjamin Sullivan (seen here in his Self-portrait). Benjamin studied painting and drawing at Edinburgh College of Art, graduating in 2000, and has since established a growing reputation as a figurative painter.

In 2008 the National Portrait Gallery commissioned Sullivan to paint a portrait of the cosmologist and astrophysicist Professor Martin Rees. In 2009 he became artist in residence at All Souls College, where he undertook a large commission depicting the College’s non-academic staff. The resulting work, the All Souls Triptych, was displayed at the Ashmolean Museum in 2012 and now sits in one of Hawksmoor’s twin towers at All Souls. 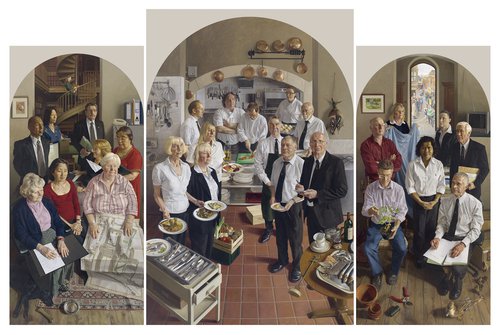 Sullivan is a member of the New English Art Club and the Royal Society of Portrait Painters, and his work is to be found in numerous public and private collections, including the National Portrait Gallery, the Royal Scottish Academy, Parliament House, Edinburgh, and several Oxford and Cambridge Colleges.

Find out more about Professor Dorothy Bishop’s work at the Oxford Study of Children’s Communication Impairments.
Benjamin Sullivan lives and works in Suffolk. To find out more about his work visit his website.