Share
Congratulations to Professor Maynard on being presented with the 2020 Cole Prize, which recognises a notable research work in number theory that has appeared in the last six years. 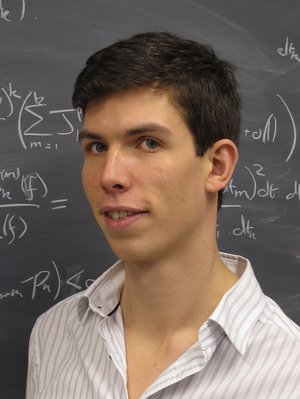 Professor Maynard received the award in recognition of three papers, published between 2015 and 2019. The Cole Prize was founded in honour of Professor Frank Nelson Cole upon his retirement from the American Mathematical Society following his 25-year tenure as AMS Secretary.

Professor Maynard is a professor of number theory at the Mathematical Institute in Oxford. Prior to this he was an undergraduate at Cambridge, studied for a DPhil at Oxford, and has carried out postdoctoral work in Montreal, Berkeley, Princeton and Oxford. His main research interest is in analytic number theory, particularly the distribution of prime numbers. In his research he uses a blend of ideas from analysis, combinatorics and algebra to try and answer old questions in number theory.

The President of St John’s College, Professor Maggie Snowling, said, ‘This is fabulous news for James and adds to the already excellent record of Mathematics at St John’s’.

On receiving the award, Professor Maynard said, ‘It is a great honour to be awarded the 2020 Frank Nelson Cole Prize for Number Theory’, and gave special mention to other mathematicians’ whose work has included ideas that he has built on, and to family and colleagues who have supported his career in mathematics. He went on to say, ‘I’ve always been attracted to the simplicity of the statements of many important open problems about primes – it is immensely satisfying to be personally involved in some of the partial progress on these questions. More generally, the field of analytic number theory feels revitalised and exciting at the moment with new ideas coming from many different people, and hopefully this prize might inspire younger mathematicians to continue this momentum and make new discoveries about primes’.