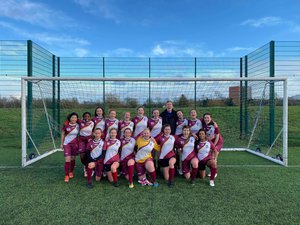 The Saints resoundingly defeated their opponents from St Catherine's College, with the scoreboard at the end of the game showing 4-0.

The team's success in the final followed a strong performance throughout the tournament, with the team beating Teddy Hall in their semi final 5-3.

The last time a women's football team from St John's was seen in the Cuppers final was 2008.

Artemis Saddington, St John's student and one of the Captains of the team, shared the following report:

"The final took place on a floodlit pitch at the Iffley Road sports centre. The players were nervous and excited, but once the game began relaxed with thanks to the large crowd supporting us. Our first goal was scored 15 minutes into the first half. All of our goals were scored by Berganovic, a striker for the Oxford University Blue's Team, who was extremely fast and amazing at dribbling the balls around multiples players before scoring. She was supported by the players on the wing who created lots of opportunities for getting the ball down the pitch: Eaton-Hart, Hinton, Vang-Mathisen, Kalayil, and Fitzpatrick. There was also incredibly midfielding from Getaz, Lawal and Savage who controlled the ball in the centre of the pitch, always winning it off the other team. Our defensive line was indestructable, with Kerr and Caterson as centre back and Saddington right back, Trump left back - St Catz had almost no opportunities for shooting at the goal! Harper showed extreme competence in goal, quickly intercepting any balls coming into the penalty area". 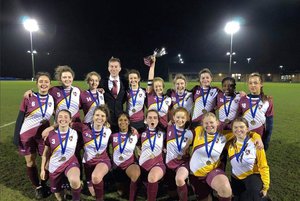 The entire community of St John's extends their congratulations to the team. The team members are as follows: