Share
Over the past year, the Women’s Network has facilitated events and activities that have provided opportunities for the women of St John’s to learn from the wealth of experience within the network, while celebrating their achievements and promoting deeper and wider participation of women in all aspects of their careers and life in general. Find out more about what the Network has been up to below.

Organised by DPhil student Angelika Love, the Women's Leadership Programme – which ran from 17-31 January – was once again highly successful. The programme brought together over 20 students and four alumnae over the course of four workshops. The participants gave excellent reviews, for example commenting that "the programme created a space to meet other women in the MCR and the incredible alumnae who are willing to invest time in sharing their knowledge with us. (…) I have benefited the most from the connections I have made during the workshops. I think it is important to have a community around the common goal of developing women's leadership". The next programme will take place in early 2020.

Not the Milk Round 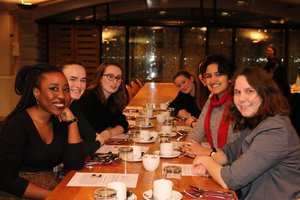 A very successful and unconventional careers event was held on 25 January and attended by 40 current (MCR & JCR) female students. The event was organised by former JCR President Christine Jiang, and saw five (mostly early career) alumnae return to College to share their experience and expertise of working in the not-for-profit and public sector, as well as environment, sustainability and STEM. Discussions, which happened over dinner in the Garden Quad, allowed for students to receive individualised advice and to follow up with a diverse range of members of the Women’s Network. Some information about the event is also available on the Women’s Network Facebook page.

Around thirty alumnae attended an informal networking event aimed at women who had graduated in the past 10 years. This was held in London at trattoria and bar Mele e Pere on 12 February. Over nibbles, antipasti and glasses of vermouth, women had the opportunity to chat and find connections with each other in the intimate atmosphere. Interest was expressed in attending similar events in the future, and many voiced the hope of meeting with alumnae across an even wider range of generations. Some information and photos are available on the Women’s Network Facebook page.

Many members of the Women’s Network attended the annual Women’s Dinner on 15 February, which is organised by the JCR & MCR Women’s Officers with the Fellow for Women. This year’s guest speaker, President of Graduate Women International Geeta Desai, gave a well-received speech on four strategies to help women become successful leaders on global issues; she was introduced by alumna Dr Tamsyn Barton (1982), currently the Chief Independent Commissioner for Aid Impact. Some information and photos are also available on the Women’s Network Facebook page.

Sarah-Jayne Blakemore: The Secret Life of the Teenage Brain 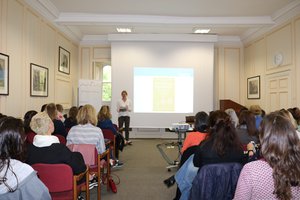 Alumna Sarah-Jayne Blakemore returned to College on 18 May and, in front of students, Fellows and alumni, as well as visitors from other colleges, gave an informal talk about her research on the adolescent brain and her recent book on the subject. This well attended event was the first attempt to integrate the academic discussions into the Women’s Network's activities, and it clearly showed that there is an appetite for similar events in the future.

On 29 May, the Women’s Network experimented with integrating into the pre-existing SCR/MCR Lecture Supper series. Hannah Nazri, a medical doctor and DPhil candidate researching endometriosis, spoke about the importance of a highly sensitive, accurate, non-invasive, quick diagnostic test for endometriosis. Some information about the event is available on the Women’s Network Facebook page.

On 29 August, the Women’s Network held the first in a series of speaker events over drinks in London. Attracting former St John's students and current Junior Research Fellows (JRFs), they presented their academic work exploring issues affecting women in the world today. At this inaugural event, of what we hope will become a sequence of opportunities for early career researchers to share insights from their work, the first speaker was Dr Liz Foulksman, who spoke about 'Money for Nothing, Work for Love: Reimagining the Future of Labour and Distribution'.

This year the Network held its annual dinner in College on 20 September in the SCR Dining room. Over 50 women affiliated with St John’s travelled from afar to (re)connect and listen to words of wisdom from two brilliant speakers: Cressida Hogg CBE (1987) and Dr Kate Doornik, (Supernumerary Fellow in Economics and former Fellow for Women), who discussed their careers and gave tips to graduates at all stages of their careers.

In addition to the face-to-face activities this year, the Women’s Network began using a wider range of communications vehicles to engage people in the Network. This involved enhanced social media presence, including the creation of a Facebook account, enhancing content included on the College website, creating a Women’s Network chapter on the St John's Online Community and producing a flyer introducing the network. Devising a comprehensive communications strategy, enhancing the College website presence and focusing on the most effective channels, will be a key area of work for the Women’s Network over the next year in order to reach a broader range of alumnae.

2019-2020 sees the 40th anniversary of women being admitted to St John’s. This is being celebrated with a range of activities under the banner of 40 Years of Women: Equality and Diversity. Organised by the Fellow for Women with inputs from a broad range of colleagues, including some members of the Women’s Network, events will take place throughout the academic year, starting with a look back at the History of Women at St John’s on 25 October.

A number of other activities are being planned throughout the year, alongside celebrations of the 40th anniversary, and will be advertised on the Facebook page and website shortly.

Find out more about the Women's Network, including how to get involved, here.