I am a Classicist specialising in ancient Greek literature and cultural history, with a particular focus on epic and Late Antiquity.

Before joining St John’s, I held a Research Fellowship at Jesus College, Cambridge. Prior to then, I was Visiting Assistant Professor of the Classics at Colgate University, New York (2017–18). I wrote my doctorate as part of the AHRC-funded collaborative project ‘Imperial Greek Epic: A Cultural History’ at the University of Cambridge (2014–17).

I am passionately committed to improving access to Classics, and want to continue to think hard about the best ways to communicate the importance and value of our subject in today’s society. I am keen to find new initiatives and establish new links to achieve this on-going aim.

I teach a wide range of literature options (Greek and Latin) to undergraduates.

Subjects for graduate supervision include:

My present research focuses on the poetics and politics of the Greek imperial period; particularly the reception of epic, the effects of religious change on literary culture, and the relationship between ‘classical’ and ‘Christian’ canons. I have recently published a book on the reception of Homer in imperial Greek epic. My new book project, entitled ‘Homer and the Bible: The Religious Politics of Verse in Late Antiquity’, seeks to continue and expand this work into new literary spaces. I have ongoing projects on a number of works from this era – including an edited volume on the Posthomerica, an article on the Sibylline Oracles, and a commentary on the Christus Patiens.

I strongly believe that these poems – which have often been dismissed as little more than an outdated hangover from the classical era – have vital things to tell us about the sacro-intellectual climate of their time: the ways in temporality, typology and religiosity were dramatically renegotiated during this era of massive cultural contestation. 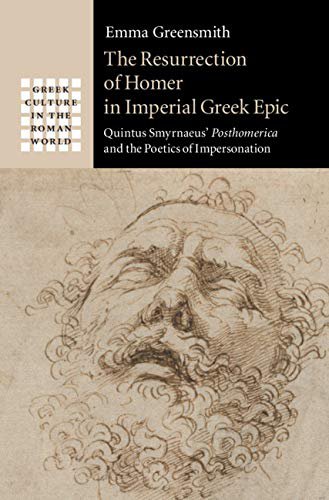 Greensmith, E., ‘Saying the Other: Personification and Epic in Late Antiquity’, in B. Verhelst and T. Scheijnen (eds.), Walking the Wire: Greek and Latin Poetry in Dialogue (forthcoming)

Greensmith, E. and Goldhill, S., ‘Gregory of Nazianzus in the Palatine Anthology: the Poetics of Christian Death’, The Cambridge Classical Journal, 66: 29–69. (2020)