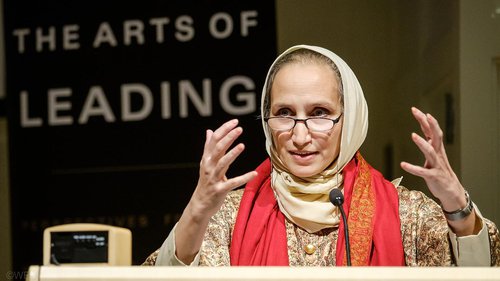 Tahera Qutbuddin, BA Ain Shams University Cairo, MA PhD Harvard, Professor of Arabic Literature at The University of Chicago, has been appointed to the Abdulaziz Saud AlBabtain Laudian Professorship in Arabic in the Faculty of Oriental Studies.

The current Laudian Professor, Julia Bray, will retire at the end of this academic year. The post plays a pivotal role in teaching and research in Arabic language, literature and civilisation in the University and in the ongoing development of Arabic studies, in particular at graduate level.

The College looks forward to welcoming Professor Qubuddin when she takes up the post on 1 July 2023.

About the Abdulaziz Saud AlBabtain Laudian Professorship in Arabic

The Professorship is one of the oldest professorships of Arabic in Europe and was established in 1636 by William Laud, Archbishop of Canterbury, who was Chancellor of the University at the time, and permanently endowed by him in 1640. The Professor was to lecture on Arabic weekly, as from 1640 the study of Arabic was an obligatory part of the MA syllabus, though in practice it was often ignored.

The first Professor was Edward Pococke, who had been Chaplain to the Levant Company in Aleppo, and who served as Professor for 55 years; he was succeeded by Thomas Hyde, who was also Bodley’s Librarian. In 1881 the statutes for the professorship were rewritten and the post was attached to a fellowship at St. John’s College, where Laud had been President from 1611 to 1621. However, it was not until 1937, when Sir Hamilton Gibb became Professor, that this actually came into effect; all of his successors – AFL Beeston, Wilferd Madelung, Geert Jan van Gelder and Julia Bray – have been fellows of St. John’s.

The Professorship was generously re-endowed in 2016 by Mr Abdulaziz Saud AlBabtain.