Share
Congratulations to James on the award of the Fields Medal, the mathematics equivalent of the Nobel Prize. 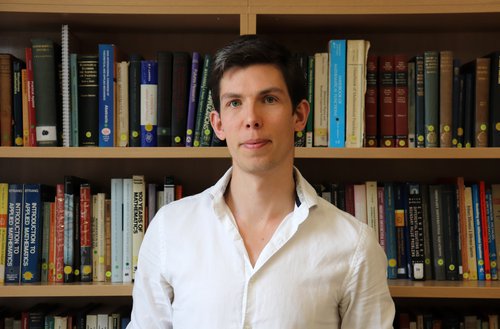 The Fields Medal is widely regarded as the highest honour a young mathematician can attain and is especially hard to win because the medals are only awarded every four years to mathematicians under the age of forty. This year Oxford Mathematician James Maynard is one of four recipients for his ‘contributions to analytic number theory, which have led to major advances in the understanding of the structure of prime numbers and in Diophantine approximation.’

James is recognised as one of the leading figures in the field of number theory. Much of his career has focused on the study of general questions on the distribution of prime numbers. His early research was on sieve methods and gaps between prime numbers and as a postdoctoral researcher in Montreal he developed a new sieve method for detecting primes in bounded length intervals, and settled a long-standing conjecture of Paul Erdős on large gaps between primes. Subsequently he showed the existence of infinitely many primes missing any given digit (for example, 7) in base 10.

More recently, James has developed a growing interest in questions about Diophantine approximation, and in joint work with D. Koukoulopoulos he settled the Duffin-Schaeffer conjecture and dramatically improved upon the work of Schmidt concerning simultaneous approximation by rationals with square denominator. Most recently, improving on classical work of Bombieri, Friedlander and Iwaniec, he published a monumental series of works on the distribution of primes in residue classes which goes beyond what follows from the Generalised Riemann Hypothesis.

James Maynard grew up in Chelmsford, Essex and attended the local grammar school (King Edward VI Grammar School). He did his undergraduate studies at Queens’ College, Cambridge before moving to Oxford to do a DPhil under the supervision of Roger Heath-Brown where he has spent much of his career to date. After graduation, he was a CRM-ISM fellow in Montreal, a Junior Research Fellow at Magdalen College, Oxford and a Clay Research Fellow based in Oxford. He is now a Supernumerary Fellow at St John's and Professor of Number Theory at Oxford.

For his research in number theory, James has been awarded the SASTRA Ramanujan prize, the LMS Junior Whitehead prize, an EMS Prize, the Compositio prize and the AMS Cole Prize. His research was the focus of an AMS current events bulletin and a séminaire Bourbaki, and he was an invited speaker at the 2018 ICM.

Commenting on the award, James said:

'I’m delighted to win the Fields Medal! I hope that this recognition can help inspire the next generation of mathematicians at St John's – we’re lucky to have a really friendly and talented group of students and Fellows at the moment.'

The other three winners of the 2022 Fields medal are Hugo Duminil-Copin from the Université de Genève, June Huh from Princeton University and Maryna Viazovska from École polytechnique fédérale de Lausanne (EPFL).

Watch James discuss the award, his work and where he gets his inspiration in this short interview.