Share
From creating virtual events to participation in the Oxford vaccine trials, members of St John's have found a multitude of ways to get involved with the wider community

The Admissions Team held two Virtual Open Days on 1 and 2 July 2020. They were hugely successful, with 240 active participants – the number of users who asked a question or liked a question – and 3027 ‘joined’ participants (the total number of users who viewed the Q&As). At the time of writing there had been a total of 1180 views of our videos, including 664 of the ‘Why St John’s?’ video, 230 of the ‘Meet the Students’ video, and 286 of the ‘Meet the Tutors’ video.

The team launched a series of online events for alumni, called SJC Online. These consist of a St John’s Fellow giving a 30–40 minute talk on an aspect of their research, followed by a Q&A with the audience. These have included ‘Beyond Our Planet’ with Professor Katherine Blundell, ‘Homer and the Bible’ with Dr Emma Greensmith and Professor Maggie Snowling on ‘A very short introduction to dyslexia’. The talks have been very popular with large audiences of over 200. Recordings of the talks are available on the College website.

Speakers for the future include Professor Philip Maini, Professor Carolyne Larrington, Professor Hannah Skoda and Professor Lloyd Pratt. There are also plans for a virtual Trivia Quiz for alumni.

We now have a dedicated section of the website full of online resources to connect alumni with the College; quizzes on past issues of TW and the College history, nostalgic Spotify playlists, links to podcasts and lectures featuring St John’s Fellows, and the Alumni Bookshelf.

Marco Fabus took part in the first vaccine trial in Oxford and found it a really interesting experience. He was hopeful of an early vaccine given the promising results thus far.

He also reported on the Physics Schools dinner:

‘This was moved to Teams which was quite a unique experience. Our tutor, Tony Weidberg (to whom all of us remain eternally grateful) sent us vouchers for food delivery and we marked the end of our undergraduate degrees at least with some elegance. It was a pleasant way to catch up with the rest of the year and Tony in quite a festive mood, albeit in an online-only capacity.’

Oxford University has led the world in developing a COVID-19 vaccine. A number of St John’s staff and students enrolled as participants in the COV001 vaccine trials, including Professor Tony Weidberg. Physics student Marco Fabus was one of the very first volunteers for the phase 1 trial. Participants, of course, did not know if they had been given the COVID-19 vaccine (ChAdOx1 nCoV-19) or the control vaccine…

‘Chapel moved online, with Evening Prayer on Sunday, Morning Prayer Monday to Friday, and Compline intoned by the Chaplain in place of Wednesday Evensong.  At no service was I alone, and I was particularly delighted by the fact that we saw so many leavers at the Leavers’ Service. I’m grateful that the porters were able to ring the chapel bell once for each leaver, recorded by a Junior Dean and played at the end of the service, poignant and celebratory.’

As President of the Oxford PPE Society, Leo Nasskau had an exciting Trinity Term. In place of the society’s usual eight physical events, Leo helped created the world's first international PPE society, bringing professional organisations, university faculties, and student societies together from every continent in the world.

‘We had politics and finance groups from Canada and the USA, including from Tufts, Harvard and Princeton; in South America and Africa we had a number of economics societies; in India we partnered with a range of economic faculties at the University of Delhi, as well as the Inclusive India Economic Forum; whilst in Australia we worked with a few PPE student societies. Of course, we also set up links to groups in the British Isles too, bringing 60 different organisations together in total. We shared with them our livestreams and our podcasts, which represented 24 events in total. From academia we spoke to Cass Sunstein and Patricia Churchland, who feature extensively on humanities reading lists; from politics we spoke to Michael Howard, Andrew Adonis, and Jess Philips; we interviewed former ambassadors Peter Westmacott and Peter Ricketts; economists like Tim Harford and Kimberly Clausing joined us; and we also spoke to two St John's alumnae: Bronwen Maddox and Faiza Shaheen, respectively the Directors of the Institute for Government and the Centre for Labour and Social Studies.’

To cancel, or move online – and if the latter, how to do it? When ‘lockdown’ suddenly happened the annual conference of OxPeace, the Oxford Network of Peace Studies, was among many facing that question. This year’s theme honoured 20 years of UN Security Council Resolution 1325 of the year 2000, on increasing the participation of women in the fields of peace and security. A dozen speakers were lined up to present on policy, research and practice flowing from Resolution 1325. The venue was to be the Garden Quad Auditorium on Saturday 16 May, with a dinner and speaker at Rewley House the previous evening. College had adopted the Conference as part of its ‘40 Years of Women’ programme and was to sponsor the sandwich lunch for an anticipated 80–100 participants.

We turned to IT wizard Matt Jennings, who efficiently organised time on the College Zoom PRO account. But the limit was 100 participants, and registrations filled up immediately. Three knowledgeable young OxPeace committee members, scattered between Oxford, Germany and Singapore, came to the rescue and we secured our own account for 500 participants for one month. One member was already organising another conference, and advised condensing our whole-day programme into four hours including a 20-minute break. Wise advice as that was just the right length. Two speakers dropped out, one being NATO’s Special Representative for Women, Peace and Security (Zoom was deemed a security risk) and one being unwilling to transfer to the cyber-world. That left three plenary speakers: Teohna Williams, CEO of Business Plan for Peace, Sanam Naraghi Anderlini, Director of LSE’s Centre for Women, Peace and Security, and Frances Guy, Gender Adviser, UNDP Regional Bureau of Arab States; and seven panel speakers making up three panels. Each speaker had 15 or 20 minutes, with questions through ‘chat’. Out of 290 registrations, the actual ‘attendance’ was 106, a fairly typical ratio apparently. No doubt more will watch the podcasts.

The input was gripping, from the question of ‘the feminine’ in peace and security to the role of women in peacebuilding in Sudan and Afghanistan, women in British army UN peacekeeping missions, research at Edinburgh on the increasing involvement of women in peace agreements and implementation, the need for training and raising gender awareness, and combatting gender and sexual violence. Frances Guy in Amman sent an accolade: ‘That was honestly the best Zoom conference I have been in – and I have been in a few meetings that attempted to have panellists… none worked as smoothly as yours.’ We learnt to keep it short, facilitate confidently, have a break, and remember to put the speaker on full screen when recording! A record of this and previous conferences, including podcasts, can be found on the OxPeace website.

The Mathematics Fellows held a Virtual Schools dinner for 2020’s graduating mathematicians and computer scientists. The screenshots of the event also show Professor Charles Batty opening a mysterious parcel that the students had sent him with strict instructions not to open it until the dinner. It turned out that abominable snowmen play a key role in one of Charles’s lectures – and now he has his own!

The connection with my lectures is that the existence of a non-measurable set of real numbers has been compared to the existence of yeti (specifically in a book by Hilary Priestley, an Oxford tutor who is now retired).  You are very unlikely ever to meet one, but you should be cautious in case you do. The lecture in question occurs in Week 2 of Hilary Term, when there is a chance of snow. In 2019 when most of the students at the dinner were in my lecture, there was a bit of snow on the ground but not really enough for a snowman. I have lectured this course six times, the first time in 2009 when there had been a substantial overnight snowfall and there were plenty of snowmen to be seen, and some of them might have been thought to be abominable but they were probably not yeti.

The term ‘abominable snowman’ for yeti was invented by the British-led expeditions trying to climb Everest. Who were the first people to succeed (including returning alive)? Tenzing Norgay and Edmund Hillary. I cannot establish the gift's gender so we should allow for it being a snowwoman; possibilities: Alex, Chris, Sam, … Hilary. So the gift's name is Hilary! 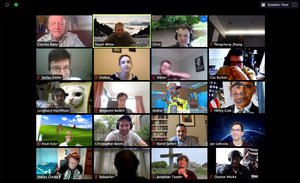 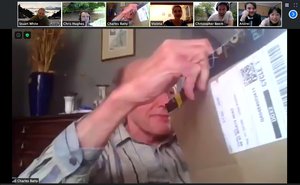 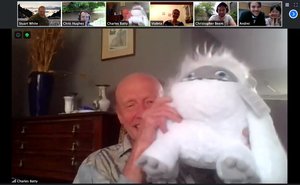