Share
St John's provides financial support for both graduates and undergraduates through grants, scholarships and prizes. 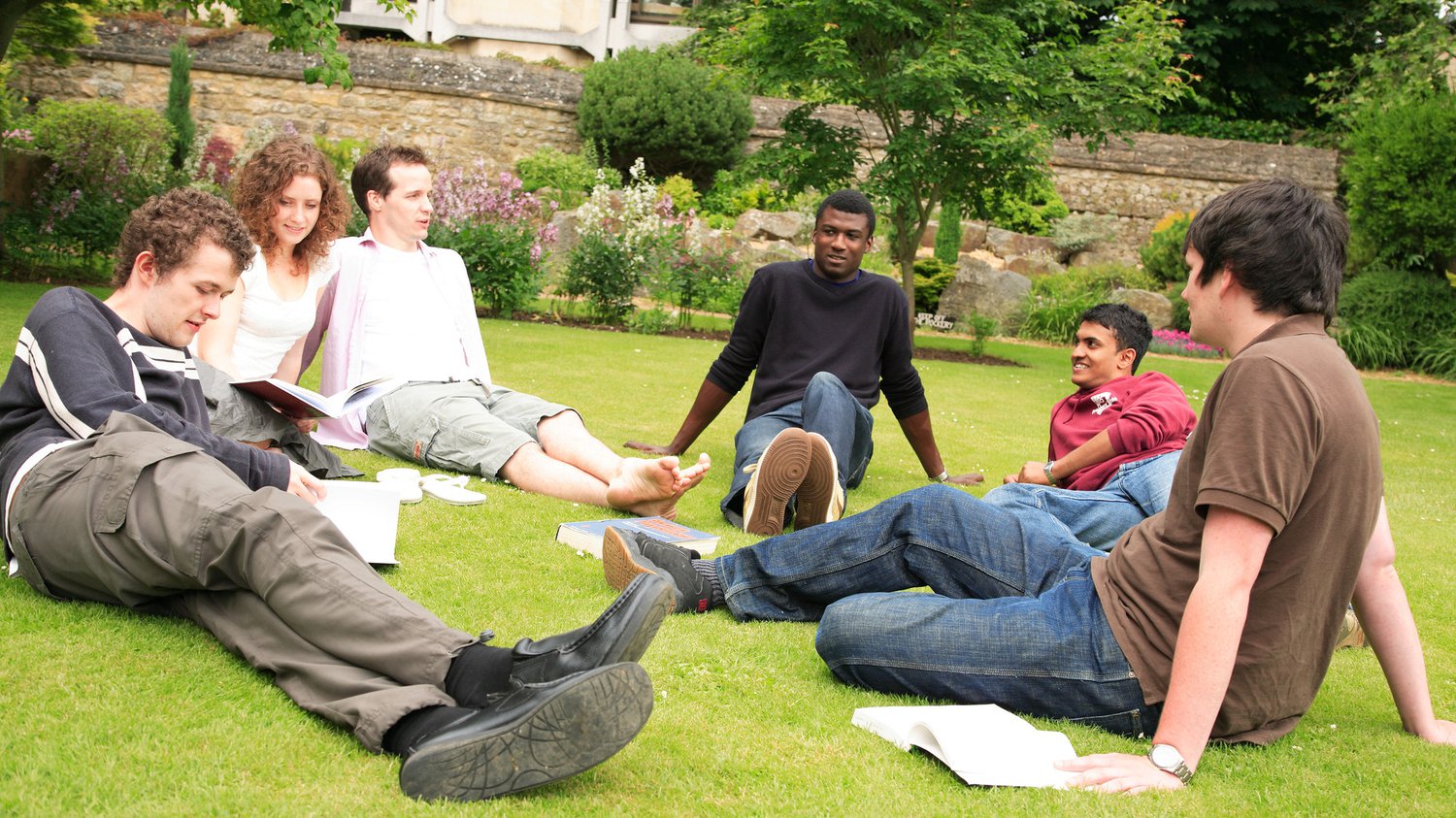 For information on course fees and the funding available to undergraduates see https://www.ox.ac.uk/admissions/undergraduate/fees-and-funding?wssl=1

The Ioan & Rosemary James Undergraduate Scholarship for Overseas Students
The Ioan and Rosemary James Scholarship wishes to support undergraduates from outside the UK and the ROI in financial need. The scholarship may cover University and College fees, a living cost grant and one return economy class flight per year. The award(s) may be partial or whole depending on the assessed financial status of the applicant(s).

All applicants must apply to the University and be offered a place for undergraduate study by the University before their application can be considered. Priority will be given to offer-holders in Mathematics and joint courses with Mathematics before awards are considered in other subjects. Applications are invited from offer holders from all colleges, but preference will be given to those who hold offers from St John’s College. Offer-holders in all subjects with the exception of Medicine, are eligible to apply if they satisfy the nationality and subject requirements. To apply, follow the guidelines and fill in the applications for the I&R James Application Form by 15 February 2023.

Oxford Bursaries
Oxford Bursaries are available for Home students from lower income households. This scheme provides generous non-repayable bursaries for full-time students paying fees at the Home rate with qualifying household incomes. The type and level of support available varies depending on where you are from and when you started your course. If you are entitled to an award you will be sent a notification letter by Student Funding Services.

Oxford Hardship Fund (includes PGCE & Medical Students in years 4-6)
Financial assistance is available for Home students who face difficulty in meeting their living costs. It cannot be used to help meet tuition fees. Students will be assumed to be in receipt of their maximum student loan entitlement. To find out more, please visit the Oxford Hardship Fund page.

For further information about the range of scholarships and funding provided by the University, please go to the funding search tool at:

Academic Grants
Undergraduate students of the College are entitled to apply for help towards the purchase of approved books and materials of an academic nature. The grant may be used to pay for: the purchase of portable or hand-held computing devices, monitors, desktop computers, computer software or peripherals; the cost of memory/hard-disk up-grades or computer repairs; personal printers and USB ethernet adapters for better connectivity in student rooms; tickets for performances or exhibitions directly related to a student's course of study. The College will not reimburse the costs of travel, phone or data services, printer ink or paper, maintenance or insurance contracts for items purchased. Other items will be considered on a case-by-case basis.

Students may claim during 8th week of each term and grants will be made via cheque or bank transfer. Download the Academic Grants Application Form.

Undergraduate students wishing to remain in residence after the end of term, or return before the beginning of term, or to stay in College during part of a vacation, may apply for vacation residence. Additional nights are changed at the nightly rate for the room grade.

An ‘Extended Licence’ (from 0th week Michaelmas to 8th week Trinity) is available to support students for whom the process of leaving for the shorter vacation periods at Christmas and Easter can be disproportionally difficult - and to enable them to stay in college accommodation (although you may be required to move rooms) during these periods, without the need to apply for vacation residence.

Applications for the Extended Licence is only available to:

As part of the Extended Licence, all vacation nights (nights outside of official term dates) will receive a grant allowing a 50% discount of the nightly room rate. By accepting an Extended Licence you are agreeing to the full period of the licence (from 0th week Michaelmas to 8th week Trinity) and to be charged for all nights within the licence period regardless of whether you chose to depart college accommodation for any dates within the vacations, and cannot revert to a standard accommodation licence afterwards. As the Extended Licence is discounted and includes the Christmas and Easter Vacation, those on this licence will not also be eligible for Vacation Residence Grant Days. Additional vacation residence days at the end of Trinity term, at the end of the Extended Licence, should be requested via the Intranet ‘Vac Res Booking system. The licence gives provision to remain in college accommodation, however, you may be asked to move room during the vacation periods.

Hardship Grants (University)
These grants are for students who experience financial hardship as a result of unforeseen circumstances. Please visit the University's Hardship page for further information.

Special Grants
For special academic purposes such as travel to undertake research in archives, in support of work directly relevant to your course, e.g. field trips/compulsory activities, attendance at meetings, summer schools, conferences, for academic project work to be carried out in Oxford, travel to undertake voluntary work.

In Hilary and Trinity Terms, thanks to the generosity of an alumnus, we offer a parallel programme of enrichment activities: the Expanding Horizons Programme (EHP).  Notes of guidance can be seen here. The purpose of the EHP is to enable the College’s students to enlarge their intellectual and/or imaginative horizons through engaging with ideas and/or disciplines beyond their subject. Grants will be made at a level comparable to special grants; it is envisaged that the majority of activities for which applications are supported will take place in the Easter and/or Long Vacations.  Where we receive more applications than can be funded, we will support those which seem best to demonstrate real value to the recipient of the proposed work.

Successful applicants will be required – as with special grants – to produce a report outlining the basic facts of the activity they undertake.  Additionally, EHP grantees will be encouraged to write a short reflective essay on what they have learnt through their activities, how much their own horizons have indeed been expanded, referring back to their original application.  On receipt of this essay, an additional payment will be made.

Blues Squad Grants
The College pays grants of up to £250 per year to cover the costs incurred by students through membership of university representative team squads. Claims are made on a Blues Grant application form which after completion should be accompanied by receipts, countersigned by an official of the relevant university sports club, and submitted to the Sports Officer.

Mapleton-Bree Prize for work in the Creative Arts
The College will offer a prize of up to £300, which may be shared if deemed appropriate by the judges, for original work in any branch of creative art (drawing, painting, sculpture, poetry, music, photography, etc.).  If there is no entry of adequate standard there will be no award.
All junior members, whether graduates or undergraduates, may compete and the entries will be judged by a Committee consisting of both junior members and senior members of the College. Competitors should send in one example of work done during the previous twelve months. Entries are considered in Trinity Term each year and should be sent to the President's PA not later than the end of the third week of Trinity Term.

Alister Sutherland Award
This award is for a journey in the high mountains. Applications are invited for this award which has been instituted as a result of a generous gift from Dr Gillian Sutherland in memory of Alister Sutherland, distinguished economist, who read Politics, Philosophy and Economics at St John's. The award, up to £350, will be made annually to an undergraduate or graduate member of St John's who presents the most imaginative and best planned proposal for a journey in the high mountains, preferably (but not necessarily) in mountainous regions where the summits exceed 3000 metres in height. The purpose is to encourage the discovery and the enjoyment of the high mountains.
Applications are considered in Hilary Term each year and should be sent to the President's PA not later than the end of the third week of Hilary Term.

Hans Michael Caspari UN Travel Grant
This grant is for studies in the field of International Relations. It was established through the generous gift of the late Professor Sir Fritz Caspari and his wife, in memory of their eldest son Hans Michael, who like his father and brother, attended St John's. The award, of up to £700, will be made annually to an undergraduate or graduate member of St John's to assist them to travel to Bonn, New York, Geneva, Vienna or one of the other seats of the UN or more generally to the seats of other international organisations, in order to further their study of International Relations.
Applications, in the form of a letter of no more than two pages with a separate CV and marks if available, should be sent to the Academic Office by Friday of 1st Week of Hilary Term and will be awarded in time for travel during the Easter or Long Vacations.

The College intends to offer four Music Bursaries for Junior Members of St John’s College. Each Bursary will be tenable for one academic year and will provide up to £120 per term towards the cost of music lessons. (Proof of the lessons to be confirmed by music tutors.) In addition to the four Bursaries, a John Heath Music Scholarship of £400 is available to help finance lessons for a gifted instrumentalist.

Selection will be by audition on Friday 12 November in Week 5 of Michaelmas Term. All resident Junior Members (other than those eligible for, or already receiving, other College or Faculty of Music financial support for music lessons) are eligible to apply. Applications should be made by email to the President’s PA by Friday 5 November. (presidents.pa@sjc.ox.ac.uk). They should include:

Candidates will be expected to play one piece, or an excerpt of a piece, lasting no more than five minutes. Those who require an accompanist should provide their own.

Choral Scholarships
Each year, up to eight Choral Scholars are elected after auditions in Hilary term.  Choral awards are open to women and men who are matriculated members of St John’s reading any subject, both graduates and undergraduates, who are able to demonstrate musical excellence and willingness to play a responsible role in the choir, both in terms of administration and encouragement of others.

Choral scholars are expected to have good sight-reading, the ability to lead their section and competence to sing solos when required.  The responsibilities include attendance at all services sung by the choir and the preceding rehearsals (a commitment of around six hours per week) and charge of the chapel music library.

In return, the college offers an award of £300 per annum, plus up to £360 per annum for singing lessons to its choral scholars, plus a modest fee per service, in addition to the opportunity to sing at notable college feasts, to tour and to give concerts with the choir.