Share
The College has a remarkable collection of late medieval liturgical vestments and embroidery. 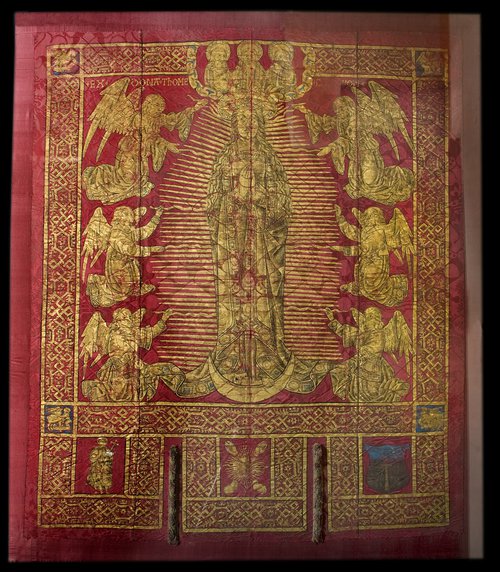 The vestments include ‘copes’ (cloaks) and hoods for use in church services which are some of the finest surviving examples of their kind in England, outside the collections of public museums and galleries.

The rarest of the pieces is a set of vestments for the pre-Reformation High Mass, including a white satin cope embroidered with flowers and two white satin ‘dalmatics’ (tunics) edged with crimson velvet. It is not known exactly who used the vestments, but garments of this kind were worn by priests during the service of the Mass. Most of the pieces probably date from the 15th century; embroidery of this quality was probably done by skilled Flemish or Dutch workers.

There are also two mid 16th-century banners (one pictured), probably made for the Chapel, with the arms of the Merchant Taylors' Company and of the College, and a red altar frontal made in England in the late 15th century.

Also in the collection is the cap worn by Archbishop Laud at his execution in 1645.

What are these pieces doing in St John’s?
Despite being known as the 'Laudian vestments', these pieces are probably not connected with William Laud, who became President of the College in 1611. It was commonly believed that Laud had given some of the vestments to the College. Perhaps this was because his own interest in ‘the beauty of holiness’, when he became Archbishop of Canterbury, set off fears that he was trying to return England to the Roman Catholic Church. It was these fears that led to Laud’s downfall and execution, and contributed in part to the outbreak of the English Civil War. To call the vestments ‘Laudian’ was not necessarily to praise them.

The College’s archives tell us that the vestments were already in the possession of St John’s by 1602. An inventory of that year describes a collection of ‘old superstitiouse church ornaments’ given to the President by the niece of the College’s Founder, Sir Thomas White. White was a Catholic and founded the College during the reign of the Catholic Queen Mary. He was also a wealthy merchant, and his college took the name of the College’s patron saint, St John the Baptist, because St John was the patron saint of the guild of Merchant Taylors. White may well have given the vestments and embroideries to form part of the furnishings of the College’s Chapel, as there is a note that he gave the Chapel ‘divers utensils, ornaments, vestments, copes, crucifixes etc’ in 1557.

It seems most likely that the Founder’s niece had kept the vestments in White’s manor house at Fyfield near Oxford after the accession of Elizabeth I and the return to the Protestant faith — when of course these kinds of vestments were disapproved of in church services. Fyfield was a place of refuge for the Fellows of St John’s (who fled there to avoid plague, among other things). It was also somewhere that objects could be hidden, to avoid them being destroyed by the authorities or simply looted. The collection has remained largely intact since the 17th century, despite forming part of the dressing-up box of the children of one College President in the 19th century!