Share
The Chapel welcomes all members of college and staff, and all are encouraged to enjoy the possibility that the Chapel and its services offer for reflection. Members of every Christian denomination, as well as those with no Christian faith, are valued participants in all aspects of Chapel life. 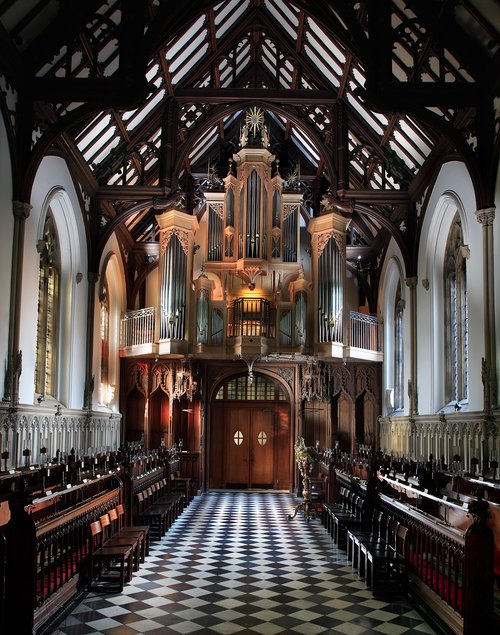 The Chapel exists to promote thoughtful responses to faith. It has a strong musical tradition, with a wide repertoire, and guest preachers and speakers emphasise the diversity of the Christian tradition and the possibilities of interfaith dialogue.

The Chaplain is the Revd. Dr Elizabeth Macfarlane.

There is a termly Roman Catholic Mass.

Sir Thomas White left instructions that St John’s should have a choir to assist in the provision of chapel services, and his wishes have been observed for more than 400 years. Today the Choir consists of women and men, undergraduates and graduates, both from St John’s and from elsewhere in the University, who enjoy singing a varied repertoire under the direction of the Choir Director.

The Choir sings choral evensong every Wednesday in term time, and leads the singing at Sunday evensong. It also sings for special occasions, such as carol services and gaudies, and has toured extensively abroad.

Auditions for the Choir are held throughout the year. There are eight choral scholarships available, for which auditions are held in Hilary term. Details of these are available on the Grants, prizes and scholarships page.

What makes the Choir a happy and committed group of volunteers? Watch the Choir in action and listen to choristers talking about their experience of singing with St John's.

The Choir Director is David Bannister.

History of the Chapel

The Chapel has been the focal point for Christian worship since before St John’s came into existence.  It was originally consecrated in 1530 as the chapel of St Bernard’s College, the Cistercian house of study in Oxford, and re-dedicated to John the Baptist in 1557.

The Chapel as you see it today is largely the result of the reordering by Edward Blore in 1843, with subsequent alterations by Sir Edward Maufe in the 1930s. The chequerboard floor is said to date back to the Restoration period, but most other features are 19th century: the altar rails that William Laud installed were removed to the parish church in Northmoor, just west of Oxford, where they may still be seen, and the remains of the 17th-century screen are in Painswick House in Gloucestershire.  Behind the altar is a wooden reredos by Charles Kempe made in 1892; Kempe also designed the east window, with figures including Sir Thomas White and Henry Chichele, founder of St Bernard’s College.

At the reordering, the majority of the monuments were placed in the small Baylie Chapel to the north of the altar.  These include the monument to William Paddy, the physician to James I, surrounded by the snakes of Asclepius; a black urn containing the heart of the antiquary Richard Rawlinson; and a marble relief of the baptism of Jesus which commemorates president William Holmes, a great benefactor to the College.

William Laud endowed the College richly during and after his presidency, and the fine pre-Reformation ecclesiastical vestments that he gave are displayed every term.  Laud’s friendship with Orlando Gibbons led to the composition of ‘This is the record of John’ for the choir of St John’s, and this superb setting of a text from the first chapter of John’s gospel is sung regularly in Chapel: after centuries of neglect, it is now recognised as one of the supreme English anthems.

The eagle lectern was carved by John Snetzler in 1773, and the silver candlesticks date from 1720; the altar cross of 1945 commemorates the 300th anniversary of Archbishop Laud’s execution.

The Chapel also houses significant pieces of contemporary art.  To the right of the altar is a small triptych of The Life of John the Baptist by local artist Nicholas Mynheer, while in the Baylie Chapel is a modern Coptic icon of The Baptism of Jesus, made in Egypt.  In the main body of the Chapel are two windows by the acclaimed stained glass artist Ervin Bossanyi, donated by his son Jo, depicting scenes from the life of St Francis of Assisi.

You can see a virtual tour of the Chapel here.

William Laud gave the college its first pipe organ, to enhance the Chapel music-making which was particularly close to the founder’s intentions. White left instructions for services to be sung by a choir of men and boys and, though there was much disruption, including the removal of the original organ in 1651, St John’s continued to have a boys’ choir until the end of the 1960s.

In 2008, a new and exceptional instrument was created for the Chapel by Bernard Aubertin.  Sitting at the west end, tuned to Thomas Young’s temperament (which dates from 1800), it has been called a truly contemporary instrument, drawing design aspects from many historical periods, most notably the French Classical school, but also early 19th-century English techniques. While the flue-work is stunning, it is the unique solo colours, and the wealth of them, that make this organ one of the most exciting instruments in the country – it is truly an inspiring theme for performance and worship.

Bernard Aubertin also built the small chamber organ at the end of the choir stalls.

Listen to a selection of organ and Choir recordings here.