Share
St John's Medics describe their experiences on Electives spent around the world.

Hannah Jeffery and Alexander Noar both spent the first half of their sixth-year Electives in Vancouver, Canada. Hannah writes: 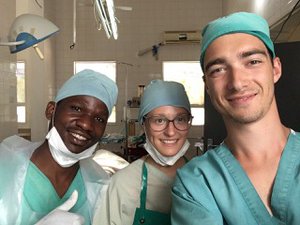 I was based with the hepatobiliary team at Vancouver General Hospital. It was a steep learning curve, with medical students expected to have more responsibility than in the UK, including a 5am start to ‘pre-round’ before the 6am ward round. I frequently stayed for over 12 hours a day, doing ward jobs such as clerking patients and prescribing and dictating discharge summaries; then being rewarded with time in the operating theatre. As well as seeing how another developed country’s healthcare system compares to ours, I think this was great practice for starting my foundation job in August.

Alec was based at a busy retinal specialist ophthalmology practice. The doctors were enthusiastic and got him involved in all aspects of the clinical work. One of the main highlights for him was performing a conjunctival stitch in the eye during one of the operating sessions. He found that the Canadian healthcare system appears to be at a halfway point between the US and UK systems, where the government pays for everyone’s healthcare but the healthcare professionals bill the government for every examination and procedure. It was interesting to see how these different incentives changed clinical practice, with the emphasis being on efficiency in order to get the highest turnover possible. This was great for Alec as it meant his skills with tools for visualising the eye improved through practising on each patient in clinic. He greatly enjoyed his placement and feels like the skills and experience he gained there will be great for future specialist training.

We both thoroughly enjoyed living in Vancouver and it has inspired us to consider a fellowship here in the future.

The second part of our Elective was very different. After flying to Lilongwe, Malawi, we travelled the 350 km by road to Nkhata Bay before taking the twice-weekly, 5-hour ferry to Likoma Island, a tiny island on Lake Malawi.

We were based at St Peter’s Hospital, a 40-bed hospital run entirely on charitable donations that cares for the 10,000 inhabitants of the island as well as health tourists from neighbouring Mozambique. In the absence of the one allocated doctor, all the clinical work was done by three clinical officers. We helped them in busy outpatient clinics (average consultant time around 1 minute), with rapid malaria testing, ward rounds and emergency surgical procedures that couldn’t wait for the boat to the mainland. 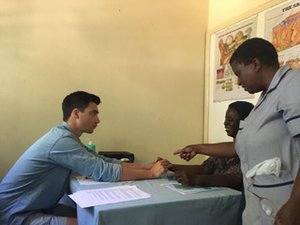 One particularly memorable event was when we found a patient on the ward having an asthma attack. Although we were happy to see treatment initiated, the most effective initial treatment is a nebulised drug to help open the airways. Upon requesting whether this would be possible, we were unable to get a definitive answer. We rummaged through the dusty airway trolley and unearthed a nebuliser machine. We located the correct medication and prepared the nebuliser, only to find its plug was missing. We were instructed to put the two exposed wires directly into the socket. When this, unsurprising, failed to work, a second machine was luckily found on the paediatric ward and the patient quickly improved. Resources were certainly scarce.

A main focus for us was to conduct a small study of eye disease on the island. We were allocated a room and an interpreter, and had no shortage of patients. Using limited equipment, including a pair of loupes donated by the Loupe Store, we examined the front and back of their eyes. We saw some interesting pathology and spent the last day writing referral letters which patients could take to the mainland for treatment with an ophthalmologist we were in touch with. A common and easily treated condition we saw was blepharitis, so with the help of the interpreter we wrote out instructions for eye care in Chichewa, the local language. We plan to turn this into a poster to send to the island, and to write up and hopefully publish the findings of the study. We also became aware of the lack of glasses on the island, so are hoping to do some fundraising to send glasses of various prescriptions.

We are both very grateful for the generous contribution of the Special Grant, which helped to enable our Electives. I have no doubt we will be better rounded doctors as a result of our experiences.

Freddy Thurston is spending his sixth-year Elective in India and Nepal: 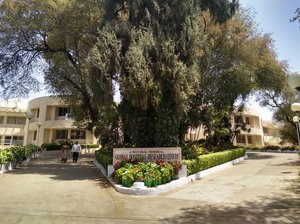 He writes: ‘I'm doing the first half of my elective at the J. Watull Global Hospital & Research Centre, a small 70-bed hospital in Mount Abu, a hill town in Rajasthan. It's run by a spiritual organisation called the Brahma Kumaris, who have their headquarters in this town.

In addition to time attached to general medicine and anaesthetics, I've also had the opportunity to see some of the complementary therapies that the hospital offers alongside conventional medicine, such as ayurveda, yoga therapy & spiritual counselling. I was also able to accompany the hospital's Village Outreach Programme, which provides a weekly clinic in each of about 15 surrounding villages, as well as providing a morning meal for the children attending the village schools and running sewing classes for local women, so they can set up small textile businesses.

This week I will be attached to the neuropsychiatry department, and making a trip to the trauma centre and eye hospital that GHRC runs in the valley.

On weekends I've been out trekking in the nature reserve that surrounds the town, which has some amazing caves, as well as visiting some nearby Jain temples which are said to have some of the finest marble carvings in the world.

Soon I will be leaving to fly to Nepal, where I will spend the rest of my elective attached to the department of surgery in Patan Hospital, near Kathmandu.’