Share
Research workshops and seminars on a broad range of subjects are held in College. Here we report on some recent projects.

Trans-disciplinary conference: Geo- and biopolitics in historical perspective - May 2017 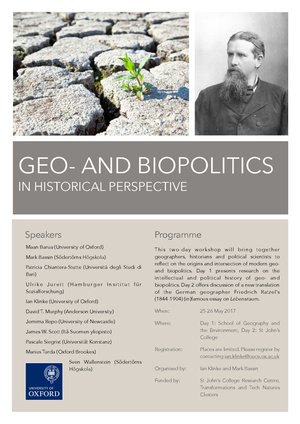 On 25-26 May 2017, St John's hosted a conference on the historical origins of geo- and biopolitics. The event brought together 45 geographers, political scientists and historians from Finland, Germany, Italy, Norway, Sweden, the United Kingdom and the United States to debate the roots of the influential idea that the state should govern in the name of both its territorial soil and the life of its population.

Presentations on day one covered issues such the Third Reich’s population policy in Eastern Europe, the medical history of the concept of gender, Hungarian interwar nationalism, as well as political notions of life and earth in the writing of influential 19th and 20th-century thinkers such as Rudolf Kjellen, Lev Gumilev and Élisée Reclus, Pëtr Kropotkin and Lev Mechnikov.

The focus on day two was on the work of the controversial German political geographer and zoologist Friedrich Ratzel (1844-1904), infamous for coining Lebensraum (living space), a term which would eventually find its way into National Socialist ideology in the 1920s. Our discussions were centred on a new translation of his 1901 essay in which he sought to fuse biological and political forms of analysis.

The results of our discussions will be published in a forthcoming special issue with the Journal of Historical Geography (Elsevier).
Dr Ian Klinke

On 20-22 April 2017, St John's hosted a conference on equity market structure issues, organised by Professor Walter Mattli. The purpose of the conference was to bring together leading industry experts, policy-makers and academics from law, finance, economics and political economy for a focused discussion on the most fundamental equity market structure issues and the most desirable solutions from a broad socio-economic perspective.

Unlike several recent conferences on market structure, we sought to base our discussion on the best available non-partisan, large-scale or case-specific empirical evidence pertaining to market structure issues, and to critically reflect on the findings and their implications by engaging sophisticated theoretical frameworks of interpretation.

This intense discussion involving a select international group from different professions and disciplinary backgrounds generated new insights into how best to approach equity market problems, assess the strengths and limits of various regulatory and market solutions, and understand the interplay of these solutions. The participants were selected on the basis of their outstanding contributions to debates on how to improve the functioning of capital markets, as market participants, policy-makers or academics.

The 16 sessions in the programme included:

The conference was a great success. We are now planning a series of publications and possibly a follow-up conference next year.
Professor Walter Mattli 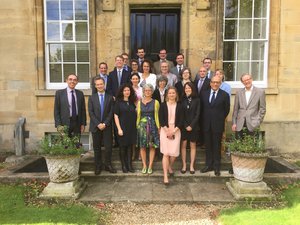 On 1 October 2016 a major reform of the provisions of the French Civil Code came into force, dealing with the law of contract, the general regime of obligations, and proof of obligations. Professor John Cartwright of Christ Church and Director of the Institute of European and Comparative Law and Professor Simon Whittaker of St John's, together with Professor Bénédicte Fauvarque-Cosson (Université Panthéon-Assas, Paris II), were commissioned by the French Ministry of Justice to prepare an official English translation of the new provisions, which can be seen on the Ministry website.

A workshop, hosted by the Institute and by St John’s College, was held in St. Giles House at St John’s on 21-23 September. It was attended by comparative lawyers from Oxford and elsewhere in the UK, French civil lawyers with interests in comparative law, and professors from Italy, Spain and Germany giving a perspective of the reforms from the points of view of their national codifications.

The workshop was a great success, with an intense study of the provisions of the reform, and fruitful exchange of views. The papers will be revised and published in the Institute’s series of publications during 2017.

The College helped to fund a 4-day workshop on ‘Non-Equilibrium Physics and Holography’, organised by Professor Andrei Starinets and held at St John’s.

This brought together researchers from three different disciplines, united by their interest in the studies of physics beyond thermal equilibrium: quantum statistical mechanics, experimental condensed matter and cold atom physics, and string theory. The purpose of the workshop was to bring the three communities much closer together and stimulate lasting interactions and collaborations:

'Non-equilibrium physics is a subject of intense interest, encompassing a wide spectrum of phenomena, from turbulence to the collective behaviour of quantum gases. In contrast to equilibrium thermodynamics, the fundamental laws governing the dynamics of non-equilibrium quantum systems are only beginning to be understood. Over the last decade, largely due to advances in experimental cold atom physics, it has become possible to study a variety of non-equilibrium quantum phenomena in controlled laboratory environments. Theoretical efforts to understand the observed behaviour, and make predictions for future experiments, have been partially successful. However, they frequently encounter serious difficulties associated with the fact that the physical systems in question are composed of particles that strongly interact with one another, which precludes the application of standard approaches. Fortunately, new developments in a seemingly totally unrelated field, string theory, have led to progress in understanding a class of strongly interacting quantum many-body systems. These advances have already been successfully used in explaining some features of a specific non-equilibrium process involving heavy ion collisions. This raises the possibility that they may hold the key for understanding the principles underlying the dynamics of non-equilibrium quantum systems in general. In order to investigate this issue, it is crucial to determine to what extent string theory methods can be applied to more general settings motivated by quantum statistical mechanics and cold atom experiments.'

Details of the speakers, as well as audio and visuals of their presentations, can be found at the workshop’s website.

The Intelligent Hand: The Persuasive Language of Drawing - June 2016 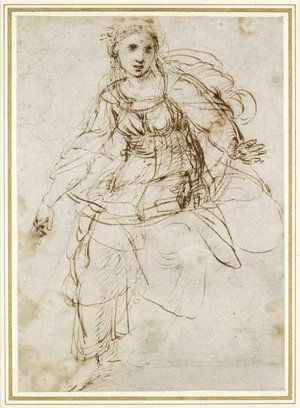 Renaissance art is based on drawing, which is generally viewed as a project-oriented activity in the artist’s studio. This interdisciplinary workshop set out to explore the conceptual and manual aspects of drawing, and its relationship to literary rhetoric and to ‘making’. The focus was on the drawings of Raphael, traditionally studied in terms of their function and attribution. The workshop aimed to open up new approaches to Raphael’s creativity in drawing, and to stimulate interdisciplinary perspectives and research through a focus on drawing, inventiveness and eloquence. Participants came from disciplines including Art History, Fine Art, Music, History, Italian Studies, English Literature and Classics. The workshop was an open-ended, unscripted event, requiring creative intellectual engagement with specific works of art.

The workshop, funded by St John’s, was a great success. The participatory, collaborative nature of the event was welcomed as innovative and rewarding, and was identified as a model for future workshops. The wide-ranging discussions will help to inform the narrative of an international exhibition in Oxford and Vienna in 2017 on the inventiveness and eloquence of Raphael’s drawings.

The workshop was an effective testing-ground for ideas and research questions that will be interrogated in two further events, each with specific research questions intended to deepen interdisciplinary enquiry across Renaissance studies, and to transform longstanding and embedded approaches to the art of Raphael.  This is part of a broader research project funded by The Leverhulme Trust and led by Catherine Whistler, with Dr Ben Thomas (University of Kent) as co-investigator.

Some feedback from participants:
‘I was initially sceptical about the open-ended nature of the workshop, without formal papers. Being a scholar who studies and publishes on the work of Raphael, I have been conditioned to think that only those who have devoted all their energies to this artist's work would have sufficient information to offer new insights. As it happened, the workshop proved me entirely wrong – it was precisely scholars from other disciplines that made the most profound and challenging contributions to our discussions … I am now convinced that this pioneering type of interdisciplinary workshop should be a model for future endeavours.’

‘The combination of Renaissance specialists, art historians, and those who actually teach drawing and draw themselves was like alchemy. I came away with a richer understanding of the process of drawing, and the complex relationship between mind, body and culture that it negotiates and performs.’

‘The opportunities it generated for individuals to follow up on ideas and interpretations that were seeded during the day are immense. I left thinking that universities should organize more meetings like this and that in the future I would use a similar approach to opening fresh dialogues within my subject area.’