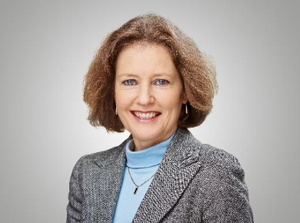 Joanne matriculated in 1981 to read Modern Languages, making her one of the early generation of women at St John's. Following her undergraduate degree, she completed a Postgraduate Diploma at Canterbury University and went to work at British Nuclear Fuels as a translator for French, German, Italian and Spanish.

Joanne then spent four years at Mercedes-Benz in Stuttgart as an interpreter and translator. She went on to complete a full-time MBA at INSEAD, Fontainebleau in 1993. She then spent 19 years at General Motors Europe in Rüsselsheim in various marketing and business development roles, including being responsible for the European marketing of commercial vehicles for over ten years.

After many years in the automotive industry, Joanne became Head of Marketing & Communication at BNP Paribas Securities Services for Germany, Netherlands & Nordics where she is responsible for marketing to institutional investors, banks and brokers and is located in Frankfurt. Her responsibilities cover marketing, press, external & internal communication and she is on the Board of the bank's Germany Foundation, which executes many initiatives for helping disadvantaged youths and refugees in Germany.

At Oxford, Joanne was on the Blues Squash team, captained St John's tennis team and played for the second university tennis team. She strongly believes in the benefits of sport and being energised for work and still plays competitive tennis!

Joanne is married to a Frenchman and has a son and a daughter who all share her passion for sport and travel.