Share
The College's founder, Sir Thomas White, took over and modified the premises of St Bernard's College. Over the following century the Front and Canterbury Quadrangles were developed into the buildings we see today.

When the College was founded in 1555, it took over the premises of the Cistercian monks of St Bernard’s College, founded in 1437, outside the medieval city walls to the north. They were arranged around a square quadrangle, with the entrance from St Giles on the west, the Hall, Chapel and kitchen to the north, and residential chambers to the south. The east side, which was to contain the original Library and more accommodation, was unfinished. Some important modifications were made by the founder, Sir Thomas White, and the Front Quadrangle remains much as he left it.

The quadrangle was built of limestone from Headington, two miles east of the city. The western range, built probably in the 1490s, consisted of two, two-storey residential blocks flanking a tall, battlemented gate tower, like that at All Souls College founded by Archbishop Chichele in 1438. The top floor was originally used as a Muniment Room, and a 15th-century statue of St Bernard of Clairvaux occupies the top niche on the exterior. The Perpendicular Gothic archway below holds the carved wooden doors from the late 15th century. Over them is an oriel window whose original tracery was replaced by a sash window in the 18th century. The statues in the canopied niches beside the window, of Archbishop Chichele (left) and Sir Thomas White (right), are by Alan Collins and were given in 1961 by the architect Sir Edward Maufe.

On the interior of the west side, the niche in the gate tower holds a statue by Eric Gill of St John the Baptist, 1936, also given by Maufe.

The east side is mostly occupied by the President’s Lodgings, completed by the 1560s, while the north side includes the Hall and the Chapel. The battlements around the whole inner face of the quadrangle were added in 1616–17. 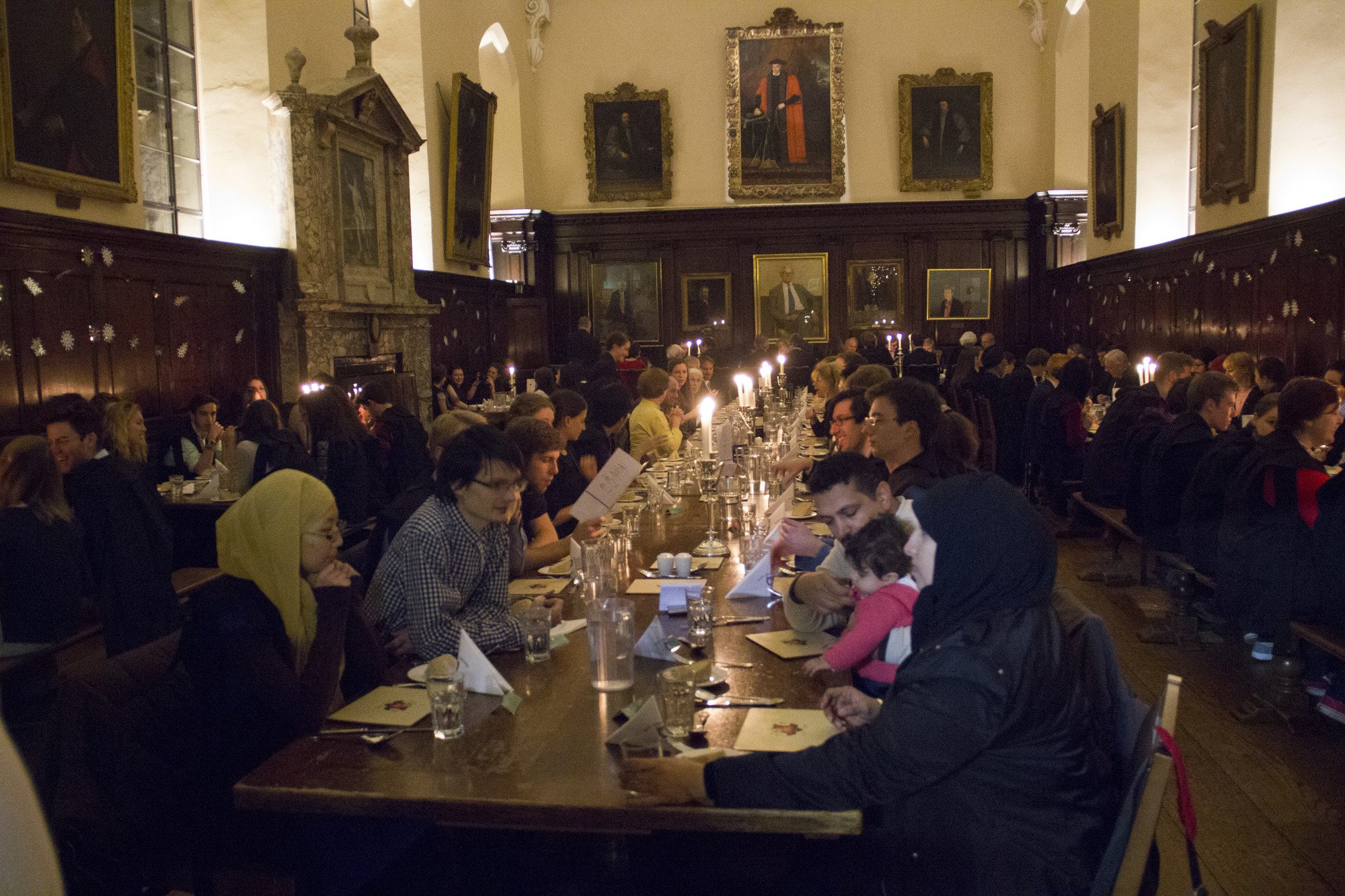 Structurally the Hall dates from the early 16th century. It was extended to the west in 1616 when a new window and doorway were added, and the enlarged building was remodelled in 1729–30. The large marble chimneypiece was built by local master mason William Townesend in 1731. His son John built the screen of Portland stone in 1743, to a design by James Gibbs, architect of the Radcliffe camera. The gallery was added in the 1930s.

The Canterbury Quadrangle, Archbishop Laud’s most generous and enduring gift to the College, was built between 1631 and 1635. Its architecture represents a successful and sophisticated synthesis of the essentially medieval style of building which had hitherto prevailed in Oxford and the new, cosmopolitan style of Renaissance classicism which had established deep roots at the Court of Charles I. It remains largely as Laud left it, a ceremonial space of great subtlety and sophistication. 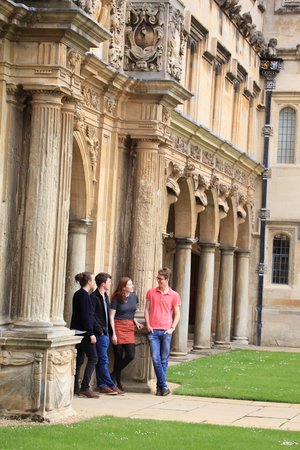 The north and south ranges, to left and right, are conventional examples of collegiate architecture of the period, with two-light windows and a crenellated roofline. The north range includes the beautifully panelled Great Parlour of the President’s Lodgings and sets of rooms, some of which were occupied by Royalist notables during the Civil War. Painted lead rainwater heads bear the arms and initials of Charles I and Laud.

The east and west fronts are each made up of an arcade of round arches on Tuscan columns, supporting an upper floor lit by Gothic windows, with a sumptuous classical ‘frontispiece’ at the centre, framed by pairs of Doric and Ionic columns and surmounted by curved pediments. The sculpture proclaims the unity of Church and state, for which both Laud and the king paid with their lives. On the first floor are bronze statues of Charles I (east) and Henrietta Maria (west), by French Huguenot sculptor Hubert Le Sueur.

The colonnade on the east range has female heads in the spandrels between arches, representing the Seven Liberal Arts: Astronomy, Geometry, Music, Arithmetic, Logic, Rhetoric and Grammar. On the opposite side are heads of the Seven Virtues: Prudence, Justice, Fortitude, Temperance, Faith, Hope and Charity. The east range houses the Laudian Library on the upper floor. 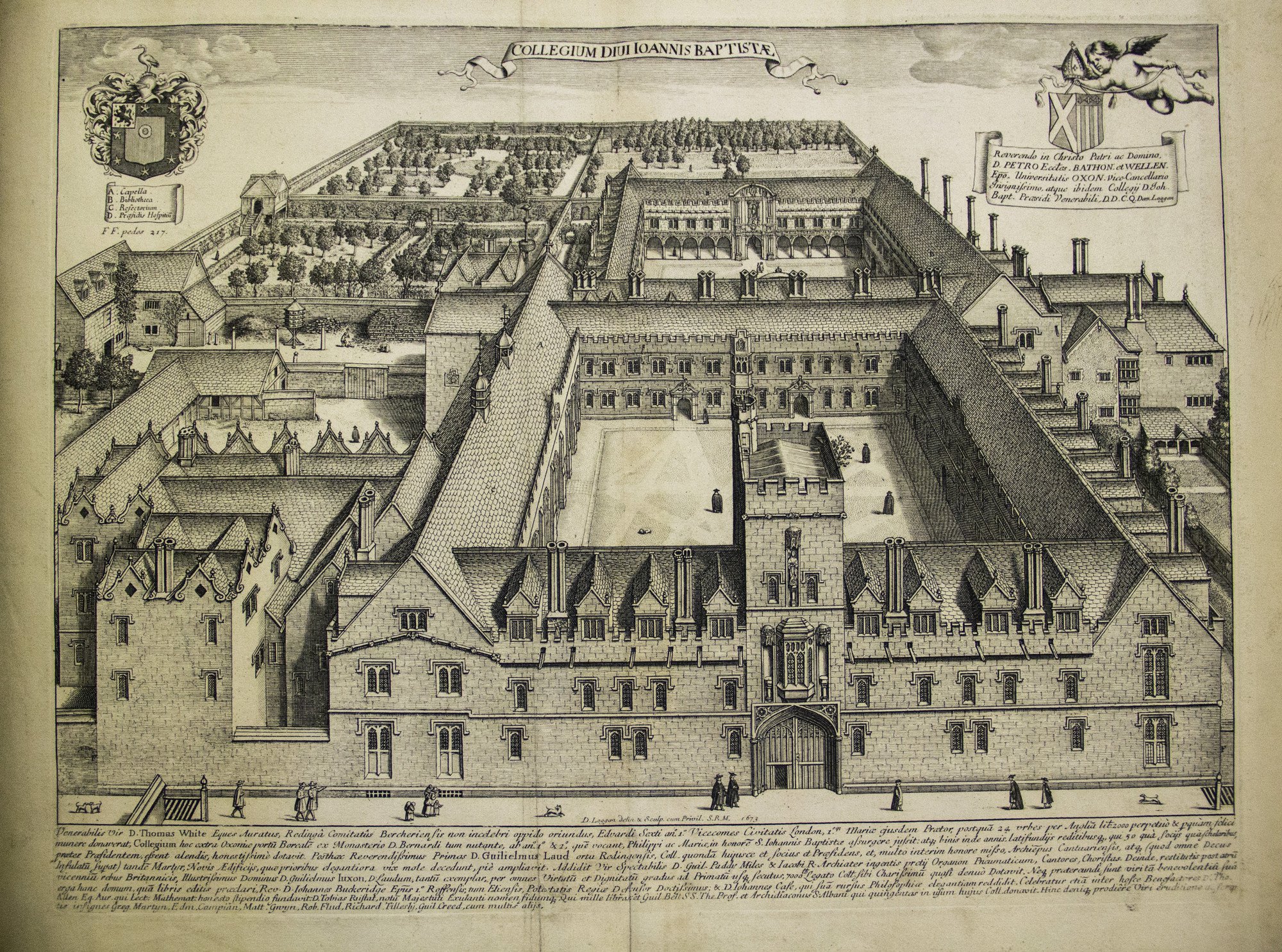