Share
Archaeological excavation undertaken on the site has revealed some interesting finds. 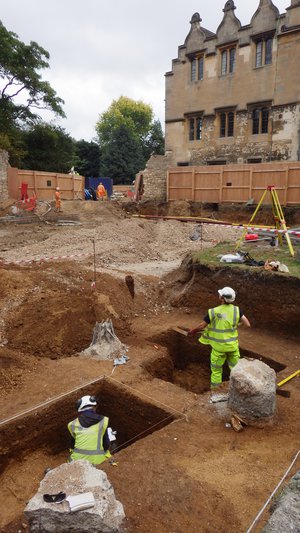 Oxford Archaeology were busy on the site in the early stages, monitoring the excavation for items of importance. Their dig found a series of quarry pits dating back to the 16th century, which would have been quarried for sand and gravel used in the construction of the College and its later expansion. They were then filled with rubbish and other materials, to help level the ground.

This has been a source of early post-medieval objects that are providing an insight into life at the early College. The lower half of a tin-glazed earthenware drug jar, dating from 1580-1650, was found here, as was a 'Bellarmine' jug, stamped with the face of a bearded man, from the 17th century. A few coins were found, including two Nuremberg jettons, gaming or counting tokens, and a mid-17th-century Charles I farthing.

The only structural remains found were the foundations of the Sprott Wall at the eastern end of the excavation, 1.1m below ground level. The pottery fragments found at the base date to 1575-1650, consistent with the historic date of 1613 for the wall's construction.

The new Library & Study Centre will also be an environmentally sustainable building, making use of the latest technologies for generating heat and electricity. Boreholes dug deep under the gardens will provide ground-source heating and cooling for the building, while photovoltaic panels on the roof will provide electricity.

Other measures – including passive ventilation and a high thermal mass – will help to regulate the building’s temperature and humidity. From the start, our aspiration has been to create a carbon-neutral Library & Study Centre and to offset carbon emissions from the existing library spaces.