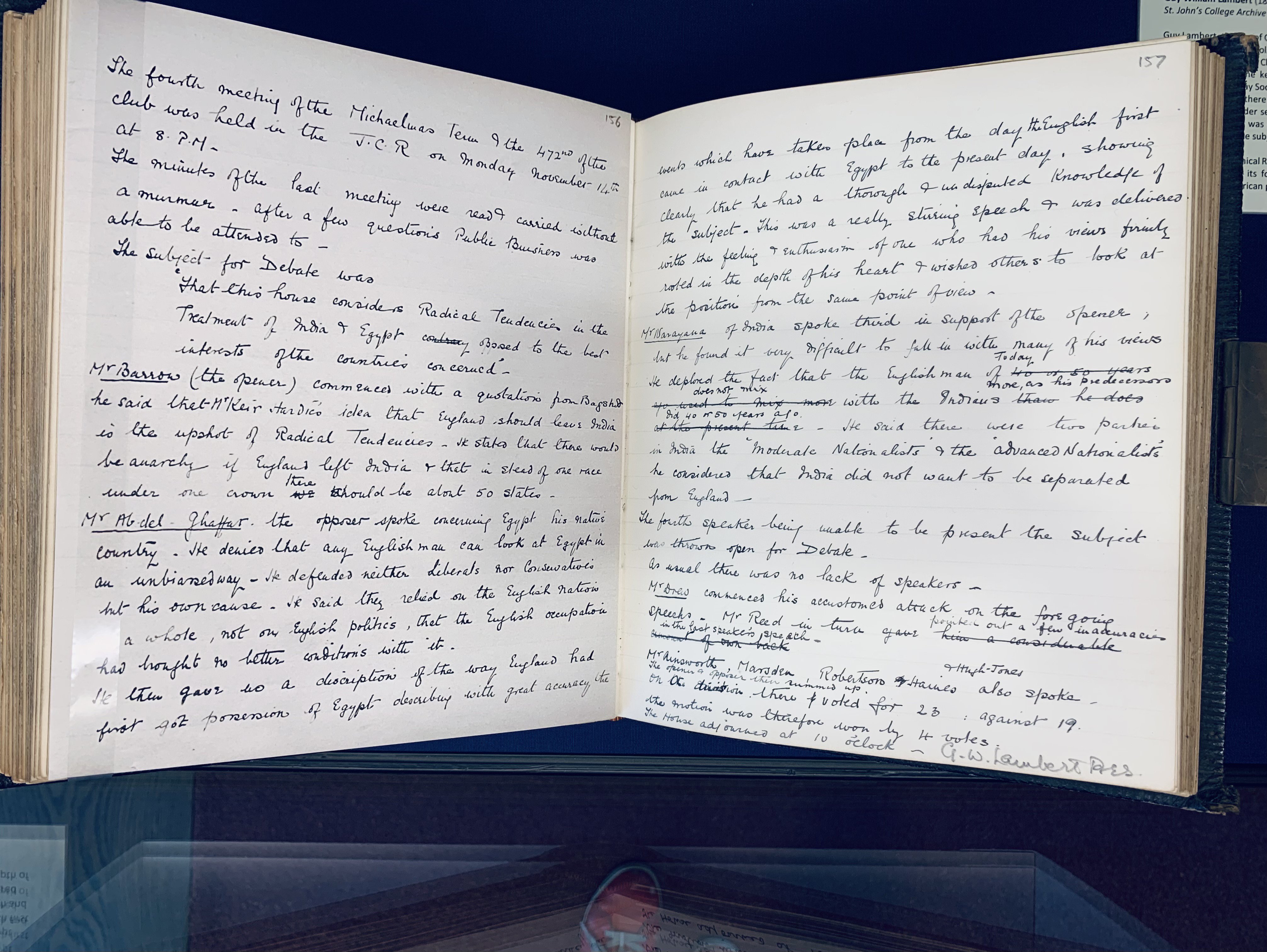 The St. John’s College Student Debating Society was established in 1879, and continued to keep records of its debates in the Society’s Minute Books until 1953. The Minute Book displayed here records debates held in the years 1903-1913. The debates recorded over the years of the Society’s existence offer a dense, detailed and vivid of the intellectual, cultural and social lives of St. John’s students, and the topics – political, social, economic, national, international, and local - that  interested and animated them. From the 1870s, when the Debating Society was founded, the university of Oxford, the city, the college, Britain and the Empire were undergoing rapid, unprecedented changes that would alter the shape of each. Two of the most important of these changes for the university was the founding of the first Oxford women’s colleges from 1879, and the passing of the Universities Tests Act in 1871 -  which allowed students from across the Empire - Asia, Africa and the Caribbean, to study at Oxford. From the late nineteenth and early twentieth centuries the student debates at St. John’s show the influence of these new interlocutors.

This Debating Society Minute Book has been opened to a debate held on 14th November, 1910. The subject was: “That this House considers Radical Tendencies in the treatment of India and Egypt opposed to the best interests of the countries concerned.” The opener, speaking in favour, was Geoffrey Selwyn Barrow, the son of an Indian army officer, who would die tragically young, in 1918, of pneumonia contracted during active service in World War One. The opposer, speaking second and against the motion, was Ahmed Abdul El Gaffar, the son of an Egyptian landowner, who would return to Egypt after university, and enter politics serving as Minister for Agriculture and Public Works.  Speaking third, for the motion and in support of the opener, was Haldodderi Surappa Narayana, the son of an Indian landholder, who would serve in colonial administration in India as Conservator of Forests. Recording the debate and noting the quality and convincingness of the speeches and arguments, was Guy William Lambert, also the son of an army officer, who would, join the War Office as a civil servant in 1913, remaining there until 1951.

For us the fascination lies in seeing the debate and its many voices from a range of perspectives through Lambert’s eyes - from across the distance of a hundred and eleven years - and sensing through his writing something of the intellectual tension and emotion of the moment:

“He (Ghaffar) gave us a description of the way England had first got possession of Egypt describing with great accuracy events which have taken place from the day the English first came in contact with Egypt to the present day, showing clearly that he had a thorough and undisputed knowledge of the subject. This was a really stirring speech and was delivered with the feeling and enthusiasm of one who has had his views firmly rooted in the depth of his heart and wished others to look at the position from the same point of view”. 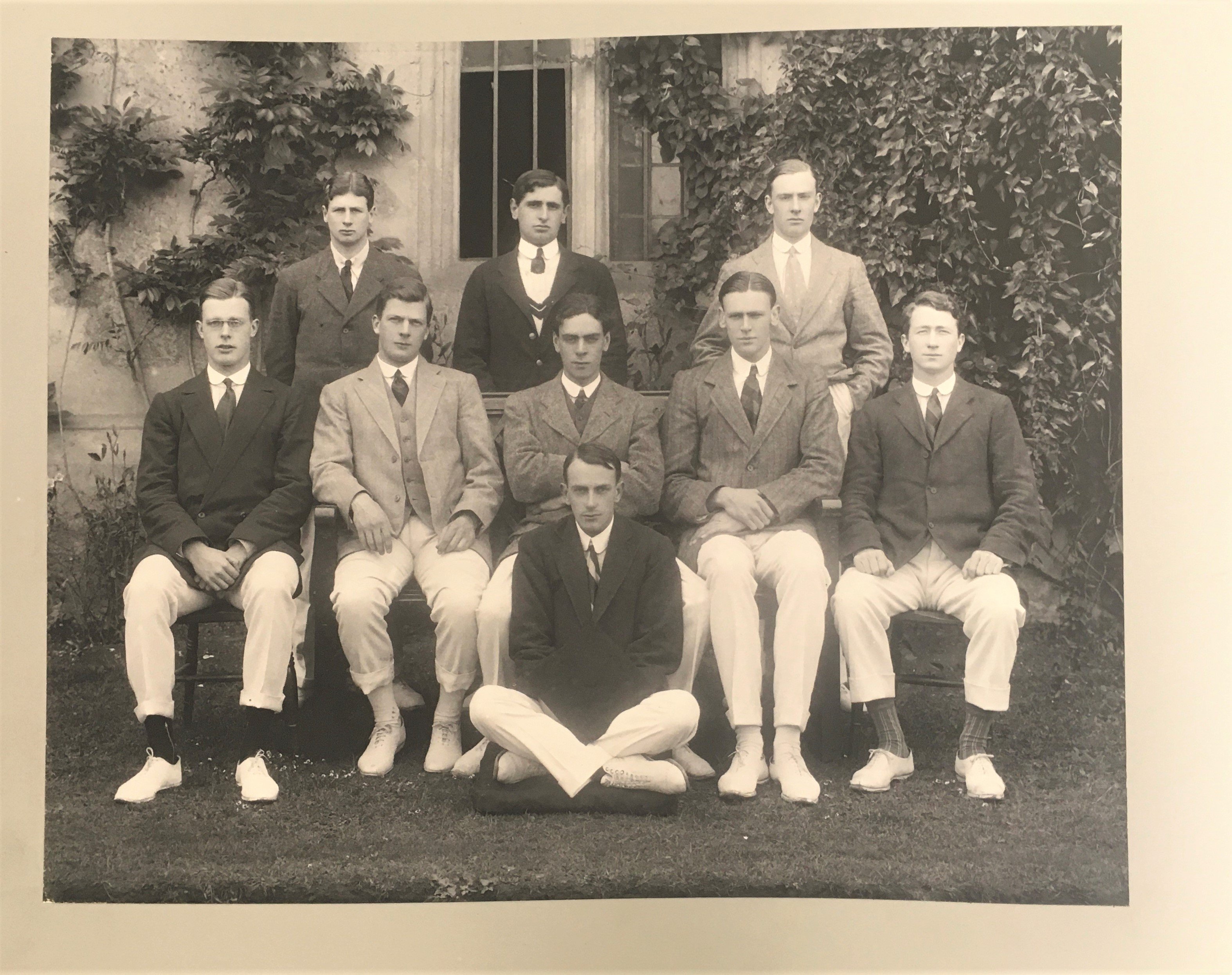 Ahmed Abdul El Ghaffar was the son of Ahmed Bey Abd EI Ghaffar, an Egyptian landowner. Ghaffar read Modern History at St. John’s and was -  as this Debating Society Minute Book shows  - an enthusiastic member of the Debating Society. He was also a member of the college Essay Society and read an essay  there on the Position of Women in Islam. Judging from photographs from this period kept in College Archive, in which we have sought to identify him, Ghaffar was also a keen sportsman.  and appears in photographs of the St. John’s College VIII in 1910-1913.  Here we find him standing, second from the left, with the other members of the College Rowing Team.  Ghaffar returned to Egypt after university, and is described in college records as being a farmer and Minister of Agriculture and Public Works, Egypt. We know from a Foreign Office Despatch from Cairo in 1950, that Ghaffar was regarded at the British Embassy as a “leading liberal constitutional deputy…. very outspoken and headstrong”. 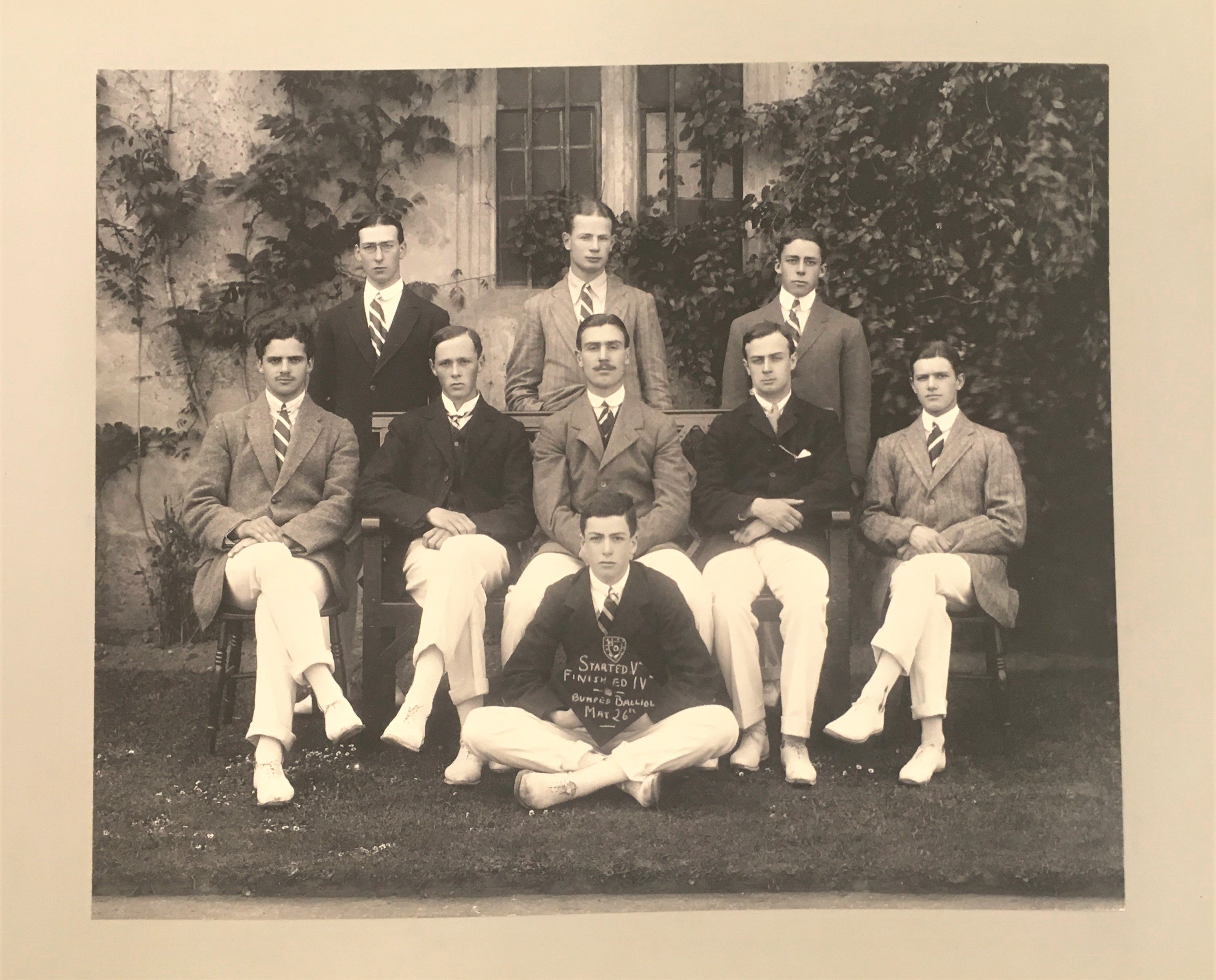 Guy William Lambert (1889 – 1984) (St. John’s College: 1908-1912), Photograph from St. John’s College Archive. Lambert is in the middle row, seated on a bench, third from the left. Judging from his position in the centre, he was probably Captain in this year.

Guy Lambert, the son of Col. Joseph Alexander Lambert, came to St. John’s from Cheltenham College on an Open Scholarship. He read what was known as Lit. Hum.  (Classical Studies) and was Captain of the Boat Club, a member of the Archery Club, President of the Debating Society (in which capacity he kept the minutes of the debates during his presidency) and Vice President of the Essay Society. Lambert joined the War Office in 1913, just before World War One, and continued to there as Principal Private Secratry and Assistant Under Secretary of State for War, serving under several Secretaries of State for War until his retirement in 1951. In later years, Lambert was an active member of the Society for Psychical Research, published several papers on the subject, and served as its President from 1956-58.

The Society for Psychical Research was  founded in Cambridge in 1882 by a distinguished group of scholars. Among its former presidents are  Arthur Balfour, the British Prime Minister, William James, American philosopher, and Sir Oliver Lodge, Physicist and Mathematician.