Share
The Library & Study Centre does not only house manuscripts, printed books, and other documents, but also a variety of artefacts, works of art, and other historical objects ranging from the 3rd century CE to the 21st century. Historically, the library partly functioned as a ‘cabinet of curiosities’ and some of its curiosities still survive, both in the library and stored elsewhere.

The Founder's chest with elaborate locking mechanism on display in the Library.

This Oxyrhynus papyrus (P.Oxy.1676) is a letter from Flavius Herculanis to Aplonarion (former slave?) asking why she did not attend his son’s birthday (3rd century CE). Fo today’s ears some parts of this letter may have been phrased rather bluntly, it other passages suggest a cordial friendship between sender and recipient. 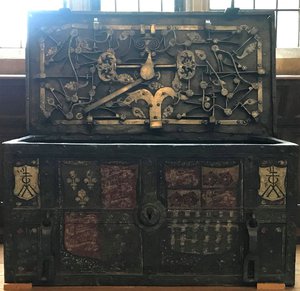 The Founder’s Chest is a strongbox that belonged to Sir Thomas White, who founded St John’s College in 1555. The chest is made of iron and painted with coats of arms and floral designs. The chest was used to store valuables (documents and money most likely) and has an intricate locking mechanism. Further examples of this type of chest, which is sometimes called “Armada chest” after the Spanish Armada, which is said to have carried strongboxes like this, still survive in other Oxford colleges. 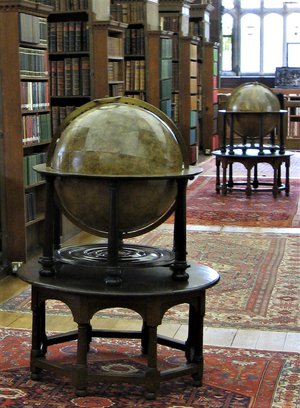 Like most historic college libraries, St John’s holds a set of globes, one terrestrial and one celestial. The current pair of globes, produced by the internationally renowned cartographer and globe-maker John Senex, date from 1740. They were donated to St John’s College five years later, in 1745. There had been several earlier pairs of globes, the earliest of which was donated in 1599, a year after the College’s historic library (now called “Old Library”) had been completed. 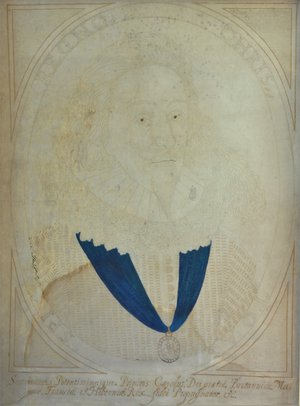 This 17th-century portrait of Charles I may look rather unspectacular at first sight, but the manner of its production reveals it as an ingenious piece of art. It was copied from a print published in Holland before 1638, using brown ink and metalpoint on parchment with blue pigment and shell gold. The lines of the face (except the line of the mouth), of the hair, the neckband, the oval rings and the motto enclosed in them, and the ornaments of the clothes (with the exception of the gold strips) are words written so minutely that they are essentially indecipherable. As early as c.1680, the portrait is described as “drawne by a penman as far as the bust, containing in the haires of his head, face, beard and other clothing, the whole book of Psalmes” (Thomas Baskerville, Ms Rawlinson D.810, reprinted in Collectanea IV, Oxford Historical Society, 1905, p.193). Digital photography confirmed that the lines are indeed script and that they contain some of the psalms, including the penitential Psalm 84. Although several early travellers declared the writing to be Latin, it is, in fact, English. The portrait is an example of micrography: a decorative art influenced by Islamic calligraphy and developed by Jewish scribes. 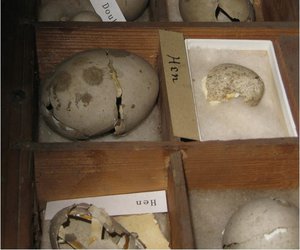 In the 1630s, the space now known as the Laudian Library was constructed by order of William Laud to accommodate the “Inner Library”, which housed Laud’s manuscripts and items of scientific interest. As well as globes, there were two skeletons in specially designed cabinets supplied by John Speed (the first anatomy lecturer at Oxford and son of the mapmaker with the same name), who also gave us an illustrated account of how he put them together. By the 18th century, these collections had become a jumble of curiosities (a “Cabinet of Curiosities”). Next to the micrographic portrait of Charles I mentioned above, visitors reported seeing “a monster lamb with two heads”, “a hat made of cloves”, “a bird of paradise”, “a stone taken from a man’s bladder, of a large size” in a silver casket, and other such items. Added to this was the collection of curiosities of the antiquary and Physician John Pointer, a Fellow of Merton, who fell out with his own college and deposited his collection with St John’s College. Some of these items still survive in collections outside the Library. The stone form a man’s bladder is now in the College’s silver collections and the few remnants of the Pointer collection are deposited with the Museum of the History of Science in Oxford, most notably a chest containing mineral and biological samples (although Pointer’s albums of handwritten and printed curiosities remain in the library). Unfortunately, many of the more curious items (the monster lamb, the skeletons etc.) have disappeared into the mists of time. 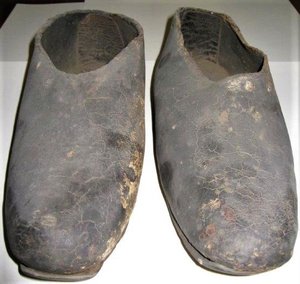 The library holds a small collection of medals (many associated with William Laud) and miscellaneous archaeological finds, including: 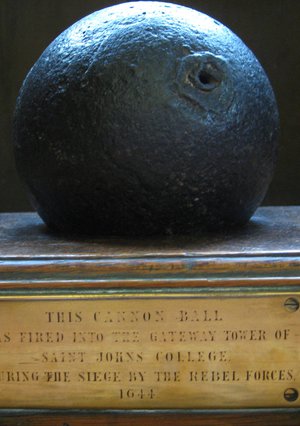 Next to the Founder’s Chest rests a cannonball which was fired at the College during the Siege of Oxford in the Civil War of the 17th century – or so legend has it.

A Bishop’s crozier and a walking stick are kept in the Laudian Library. The latter was supposedly used by Archbishop Laud when he ascended the scaffold for his execution.

Further artworks have been commissioned and information about these will be added in due course.