Gaby Guz (1980, Experimental Psychology) is a potter and artist based in London. She is a member of the Rochester Square Studio of ceramicists.

In 2015, she was Artist in Residence at Wac Arts in London, and it was here that she had the first solo show of her work.  This experience gave her the confidence to pursue her two creative passions – ceramics and life drawing – as a full time career. Two more solo shows in London followed, and in March 2019, Gaby exhibited at The Barn Gallery at St John's with photographer Rob Farrands.

After finishing her degree Gaby worked as a research assistant in the Psychology Department in Oxford. She then worked as an account planner in a number of advertising agencies in London. For the last 25 years she has been undertaking the hardest job of all: bringing up her three children!

Gaby started pottery at school in the 1970s and continued to develop her skills in adult education classes throughout her time at Oxford and while working in advertising.

The creative itch, which Gaby has had ever since she can remember, was not satisfied by working in the advertising world. After eight years, Gaby left her job to train as a potter, firstly at Camden Arts Centre, and then on a degree course at Harrow School of Art.

Gaby started life drawing in evening classes at The Ruskin School of Art while a student at St John's, but it wasn't until about 30 years later that she started to draw seriously, and this has now become a vital part of her practice.

Gaby feels that learning to use your hands in a creative way is as important as learning to read and write.  The labelling that starts at school, categorising students into the binary categories of ‘arts’ and ‘science’, is prescriptive and damaging. As in Gaby’s case, many people are both scientists and artists, and indeed flourish by falling into both camps. 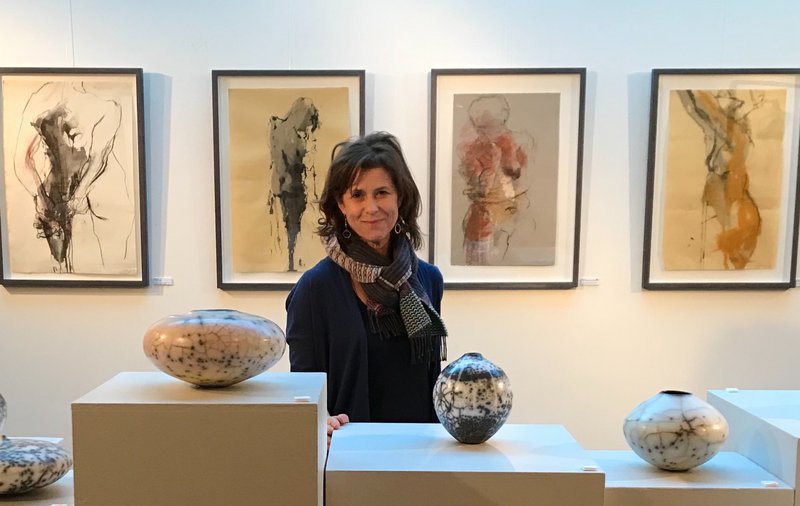