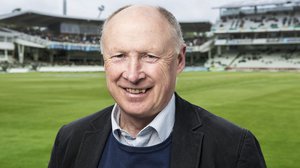 An off-spin bowler, Marks played in six Test matches and thirty four One Day Internationals for England. His entire county cricket career was spent with Somerset, spanning the period between 1975 and 1989. Marks also played for Oxford University, while up at St John’s to read Classics.

After retiring as a player, Marks became a cricket journalist. He is the cricket correspondent for The Guardian and The Observer, writing match reports and opinion pieces for both newspapers, and frequently appears on BBC Radio's Test Match Special as a summariser.