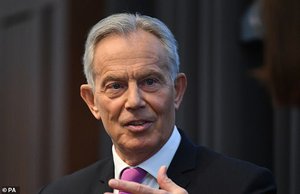 The Right Honourable Tony Blair served as Prime Minister of the United Kingdom from 1997 to 2007 and Leader of the Labour Party from 1994 to 2007. After his resignation, he was appointed Special Envoy of the Quartet on the Middle East, an office which he held until 2015. He currently runs the Tony Blair Institute for Global Change.

Born in Edinburgh, Blair's father was a barrister and academic. He studied Law at St John's and then became a barrister. He became involved in Labour politics and was elected Member of Parliament for Sedgefield in 1983. He was appointed to the party's frontbench in 1988 and became Shadow Home Secretary in 1992. He became Leader of the Opposition on his election as Labour Party leader in 1994, following the sudden death of his predecessor, John Smith.

In 1997, the Labour Party won its largest landslide general election victory in its history and achieved a parliamentary majority. Blair became the country's youngest leader since 1812 and remains the party's longest-serving occupant of the office. Labour won two more general elections under his leadership—in 2001, in which it won in another landslide), and in 2005, with a reduced majority. Blair resigned as Prime Minister and Leader of the Labour Party in 2007 and was succeeded by Gordon Brown, who had been his Chancellor of the Exchequer since 1997.

After resigning the Premiership, Blair was officially confirmed as Middle East envoy for the United Nations, European Union, United States, and Russia.

Blair has also held advisory roles at JPMorgan Chase and for Zurich Financial Services on climate change. He also gives lectures for educational institutions, including Yale and Durham University, and speaks at private events.

Blair has received multiple awards, including the American Presidential Medal of Freedom and the Liberty Medal, and is an Honorary Fellow of St John’s. He has also published a number of works, including his bestselling autobiography, A Journey, in 2010.